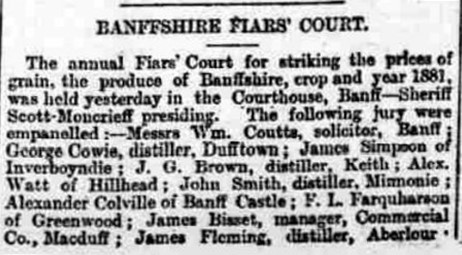 My thanks to Alan Winchester for highlighting this annual court that seemingly involves the major distillers in the region. Published in the Aberdeen Journal 4th March 1882, the court effectively set the prices of types of grain and materials.

What's of interest to us here, is that it features John Birnie in his role at Benrinnes distillery, where he is listed amongst some notable names that whisky enthusiasts will recognise. It is privileged company, but also a fantastic environment to learn your craft and excel. Being named also underlines at Benrinnes he would have worked his way into a position of status since starting his career at the distillery in 1877. Prices of grain and negotiating with local farmers (or even dealing with such individuals) was an important part of the role. This would give John a good foundation and knowledge of growers in the region before he moved on. 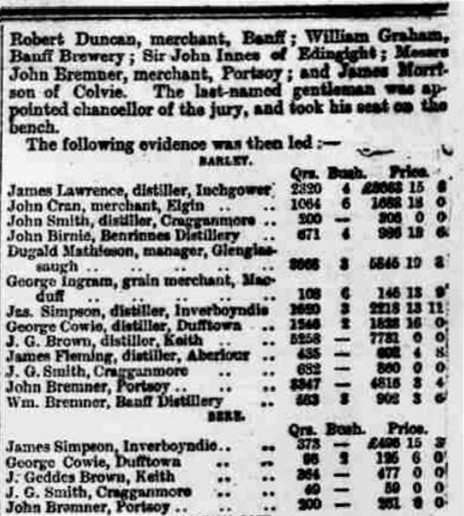 For John, we know this was his first distillery role before becoming manager at Glen Albyn in 1885. One aspect of the Glen Mhor research is piecing together his remarkable tale, which is slowly coming together here and can be followed via his hashtag. Glen Albyn did not have a good reputation, refurbished prior to his arrival, I envisage John would have looked at local farmers in the knowledge of what was being produced elsewhere and made changes to ensure a quality supply of grain if necessary.

John was well placed as Alan suggested that Benrinnes distillery had a farm attached, being a farmer’s son his brother and him would be well versed in trading agricultural products. Included in this is barley straw...

What's also interesting is the prominent interest from distillers in barley over Bere barley which was still being sold but not on the scale of popularity as it had once enjoyed. Today, we are seeing a renewed interest in the old heritage grains and what they can be bring to the final whisky. While Bere was robust to grow almost anywhere, including Orkney where it still enjoys support, it was very difficult to work with from a production point of view. Not impossible, but more intensive and demanding, which explains the shift away from the crop once farmers were offered a better alternative with a higher yield.
Ultimately, this early period of John's distilling career and family placing, would have ensured a great level of knowledge in farming and selecting the best crops. We don't have any evidence of John turning away barley at Glen Mhor, however it seems given his general dedication and professionalism, you could easily see this happening if a farmer tried to supply substandard produce.
Labels: 1882 Benrinnes John Birnie