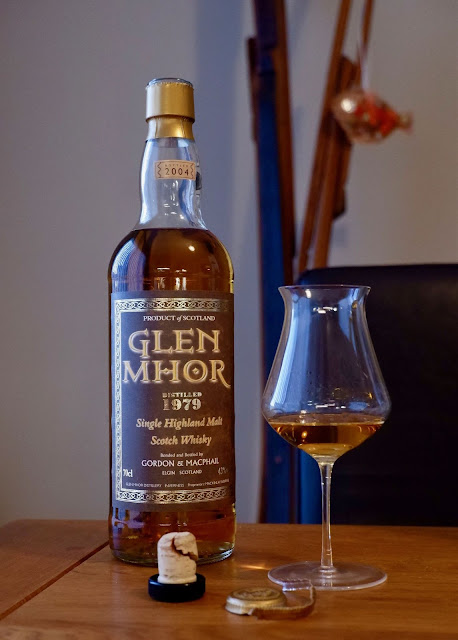 For this release, we're back in 1979 and Glen Mhor's staunchest independent supporter in the form of Gordon & MacPhail. This is the 200th post on the site as the Glen Mhor research project has gone deeper and further than I ever envisaged. Sure, I knew that the distillery had more to tell us than a few sporadic entries in books over the decades, but reaching 200 posts (in reality it could have been more if I didn't load up the site initially) comes as a surprise and has been very rewarding.

We'll certainly hit 300 with the materials I have to hand and my thanks to everyone who has offered their help and access to their materials and memories over the years. A community effort has enabled and built this resource for everyone to appreciate.

Back to the whisky, and this was distilled around the final year of the Saladin boxes on site being in production. We also know that Glen Mhor used both the Golden Promise and Triumph barley varieties at this time and both were slightly peated. The distillery was still in full production; part-time distilling wasn't introduced until 1981, when the writing was very much on the wall for this distillery and many others across Scotland.

Obviously this is the 1979 vintage, bottled in 2004 and at 43% strength. Bottle ID is JD/CJE with a barcode 5020613425224. Probably not much help as these G&M bottlings are hard to separate other than the single cask releases. However, the upsides are major as these bottlings are common sightings at auction and won't cost as much as you think. They are in essence your gateway into the murky world of Glen Mhor.

You're best looking at auction, as there seems to be a worrying trend of secondary retailers asking for increasingly unrealistic, and frankly greedy, prices of Glen Mhor. At least I managed to get the cork out of this bottle before it totally gave up and saves the hassle on the evening of the Edinburgh tasting. Once opened and set aside, this is what I thought of the 1979 over 2 sittings and it was quite the trip! 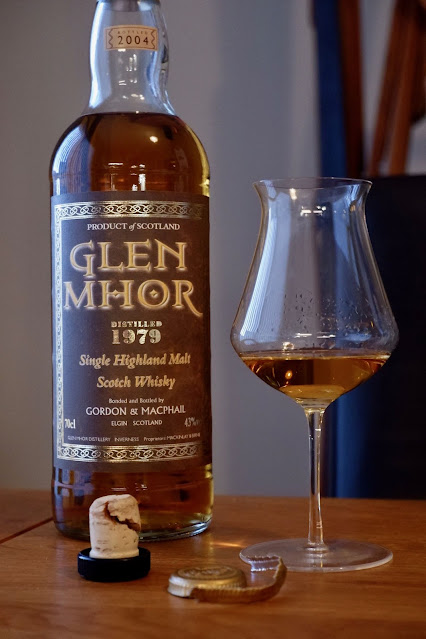 On the nose: burnt lemon and old wool, quite the curious arrival. Now, white pepper and limescale before some comfortable ground with a light caramel and peach stone. Apples and a brief floral note before faded orange and buttercup. Heather and given time, an old lantern rag, camphor and pomegranate. Where next? Oh, tomato vines and a bready character.

In the mouth: less refined and more bonkers now. At first this wasn't very approachable and while I suggest time was beneficial, it opened the gates to a burnt aspect, toast, caramel and cinder toffee. Pear, grapes and burnt butter. Oats, saccharin and musty cardboard. Oak bitterness at times and the classic concrete note. Heather, a waft of smoke, toasted pine nuts, honey and figs. Think I'll go lie down somewhere.

This is more your classic bonkers Glen Mhor bottling. The sort of release that sends enthusiasts up and over the nearest hill, desperately trying to escape the clutches of the Mhor monster, or find another. It's hard to fathom and not by design. There was, at times, something bizarrely brilliant happening in the still room without any consultants to tamper with what was an ageing distillery and equipment.

Bottles such as this underline a presence and style of whisky we don't see in the modern age and when 'modern' drinkers are faced with this, it pulls the rug from underneath their feet. Most will look elsewhere, while a handful of nutters will find all of this rather enticing and captivating. I know what camp I reside in and we'll see how this one is received during our March tasting.