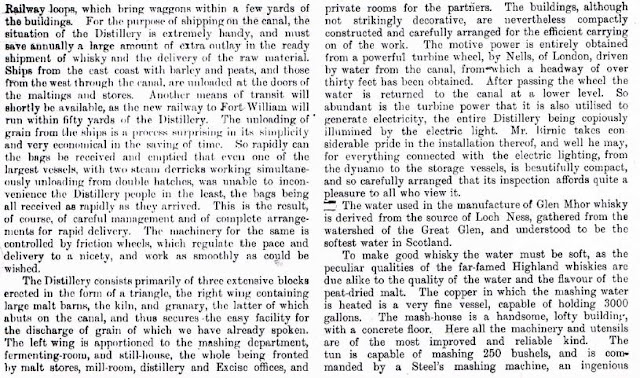 We're delighted to be able to bring you the previously missing 1898 Trade Supplement that introduced Glen Mhor, a new distillery, to a wider audience. My thanks to Alan, for providing this wonderful account. We've already covered page 1 in great detail.

Here's the text from page 2 for your reading pleasure, including some additional notes:

'Highland Railway loops¹, which bring wagons within a few yards of the distillery. For the purpose of shipping on the canal, the situation of the Distillery is extremely handy, and must save annually a large amount of extra outlay in the ready shipment of whisky and the delivery of the raw material. Ships from the east coast with barley and peats, and those from the west through the canal, are unloaded at the doors of the maltings and stores. Another means of transit will shortly be available as the new railway to Fort William will run within 50 years of the Distillery. The unloading of grain from the ships is a process surprising in its simplicity and very economical in the saving of time. So rapidly can the bags be received and emptied that even one of the largest vessels, with two steam derricks working simultaneously unloading from the double hatches, was unable to inconvenience the Distillery people in the least, the bags being all received as rapidly as they arrived. This is the result, of course, of careful management and of complete arrangements for rapid delivery. The machinery for the same is controlled by friction wheels, which regulate the pace and delivery to a nicety, and work as smoothly as could be wished.

The Distillery consists primarily of three extensive blocks erected in the form of a triangle², the right wing containing large malt barns, the kiln and granary, the latter of which abuts on the canal and thus secures the easy facility for the discharge of grain of which we have already spoken. The left wing is apportioned to the mashing department, fermenting-room, and still-house, the whole being fronted by malt stores, distillery and Excise offices and private rooms for partners. The buildings, although not strikingly decorative, are nevertheless compactly constructed and carefully arranged for the efficient carrying on of the work. The motive power is entirely obtained from a powerful turbine wheel, by Nells of London, driven by water from the canal, from which a headway of over thirty feet has been obtained. After passing the wheel the water is returned to the canal at a lower level. So abundant is the turbine power that it is also utilised to generate electricity, the entire Distillery being copiously illumined by the electrical light. Mr Birnie takes considerable pride in the installation thereof, and well he may, for everything connected with the electrical lighting, from the dynamo to the storage vessels, is beautiful compact, and so carefully arranged that its inspection affords quite a please to all who view it.

The water used in the manufacture of Glen Mhor whisky is derived from the source of Loch Ness, gathered from the watershed of the Great Glen, and understood to be the softest water in Scotland³.

To make good whisky the water must be soft, as the peculiar qualities of the far-farmed Highland whiskies are due alike to the quality of the water and the flavour of the peat-dried malt. The copper in which the mashing water is heated, is a very fine vessel, capable of holding 3000 gallons. The mash-house is a handsome, lofty building, with a concrete floor. There all the machinery and utensils are of the most improved and reliable kind. The tun is capable of mashing 250 bushels☻, and is commanded by a Steel's mashing machine☺, an ingenious...'

¹ there was a railway line at Muirtown Basin (1877-1969) with a single siding to serve Glen Albyn and the southern end of the basin. The branch was intended to carry passengers from the steamers on the canal into town but was never opened. Source: Rail Scot.

³ all the water in mainland Scotland is technically soft, is/was Loch Ness the softest? It all sounds good and was the same line being used by Angus Mackay, head brewer at Glen Mhor in 1975. The article is in our Newspaper section where he states 'we don't use ordinary water. We use the pure water of Loch Ness which has alot of seepage from the rocks and peat.'

☻ 250 bushels, depends on the type of grain and therefore its weight, but roughly 250 bushels is equal to 1.61 tonnes. To give you some modern perspective, the mashtun at Edradour is 1.16 tonnes.

☺ Steel's masher was designed and patented in 1853, invented by James Steel from Glasgow. In essence, it allows the control of flow into the mashtun, helps the mix and optimises temperature control.

Now, we're getting into some unique details about the newly constructed Glen Mhor distillery. There's a general sense of awe about the use of modern cutting-edge technology, which we take for granted nowadays. I'm interested to find out how much Glen Mhor cost to build, I've read that no expense was spared internally and the actual figures will hopefully come to light the further we investigate.

There's some great information on this page that we've incorporated into our Distillery Info page and we'll get onto page 3 soon.