Welcome back to our second article on the discovery of the original 1893 Glen Mhor distillery plans. If you haven’t read the first part of this feature, then I suggest you do so before jumping into this deep dive. This will give you a little more background and context.

The condition of the plans has been discussed previously; I’m just excited and humbled to be able to bring you these in 2021, 128 years after they were drawn up. A great deal has happened in-between and Glen Mhor is sadly no more.

The discovery of a cache of plans into the 1900s means we will be able to bring you every building change at the distillery. Most of these have been lost to time until now, as always I’d recommend our Timeline page to see the natural progression of things. As and when discoveries are made, they slot into the timeline giving us a new perspective.

A couple of thank you's before we get going...

My thanks to Rose for prepping these images as best as she can with my distinctive photographing style. These plans are watermarked with the site logo, as access to the materials was on a non-commercial basis. This protects the Archive and this site, but ultimately we are a resource and on a journey, so I know you'll give credit and please ask if you have any questions.

Also, thanks to Alan, for his input on the distilling side of things. As knowledgeable as I am, I'm no distiller or whisky historian, or consultant. So, his observations on these plans have also assisted in my commentary. Right, let's get into it, starting with the visual recreation above.

This drawing is especially important, as it gives us a predicted look of the distillery. It is labelled South Elevation and this isn't accurate. It should read South East Elevation given the layout of the site. However, it visually depicts the back end of the distillery. A reverse of the Glen Mhor we've seen over the decades. This view wasn't in existence for too long, as additional warehousing started to block this panoramic view in the late 1890s.

This is effectively the right-hand side of several photographs that look into the distillery itself, which we have on file. Perhaps the most recognisable is this approach to Glen Mhor, captured in 1974: 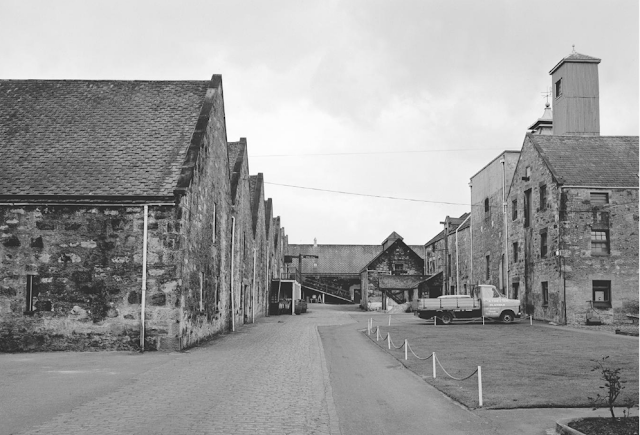 The only immediate change you can see is the creation of an additional upper floor to the left of the pagoda. And on the left, all the warehousing that was built, creating another courtyard area, while the original courtyard would become crowded with new production buildings - that's for future articles.

There's a simplicity to this drawing. It gives us perspective, the floor levels behind the external walls and a scale, but little else. Alan upon seeing these plans commented that it is a very Doig distillery, reminiscent of Dallas Dhu on Speyside, which you can visit. Built 4 years after Glen Mhor, you can see similarities and I'd also suggest Ardmore which was built around this time as well.

Now, let's venture onto the ground floor in its full, original, glory. 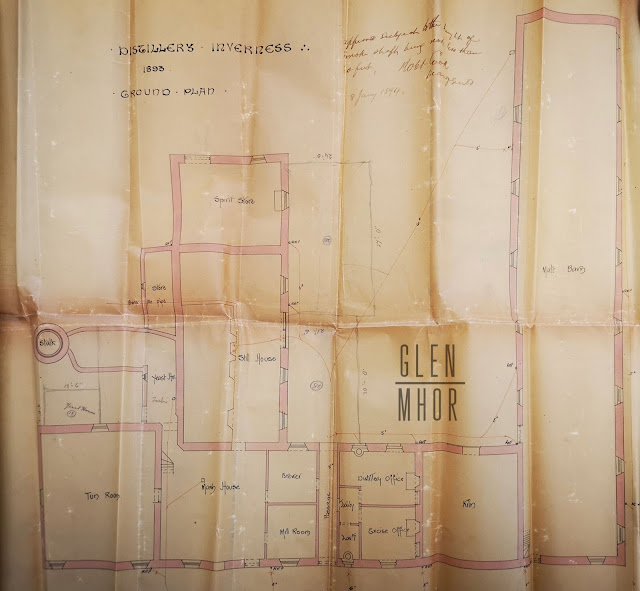 A glorious sight and one that I keep returning to. One of the initial things that strikes you is the compact nature of the design. The distillery office being beside the Malt Barns and Kiln is unusual and perhaps not a good long term marriage. The Excise Office also receives a central location and is next door to the distillery office; allowing both sides to keep in close contact and a watchful eye perhaps?

There is a logical flow to the production process, starting on the right and then moving across to the left of the site. Through our research into the Saladin Boxes installed at the distillery in 1949, we've uncovered that one of the primary motivations was the size of the malting floors:

It's an interesting situation, we know from the 1898 magazine article that the owners had planned to install another pair of stills along with other enhancements. In the end, only a 3rd still was installed in 1925 along with a larger mash tun and two washbacks. That was lost to time until we found a photograph of it. But with this new still, washbacks and mash tun, the Glen Mhor malt barns could not cope. You can get a sense of their scale in this atmospheric photograph featuring William Birnie: 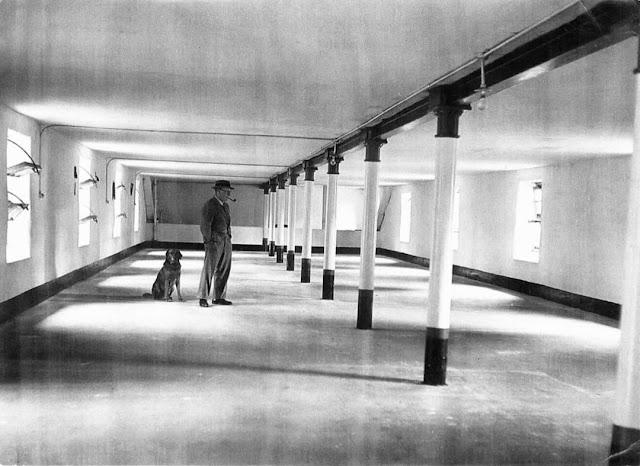 The only unused space is the passageway that cuts through the heart of the distillery, even the lavvy gets a mention and is immediately accessible to the offices. The Mash House and Fermentation Rooms are sizeable, allowing space for upgrades as suggested in the aforementioned 1898 article. However, it is the Still House that suggests an epic scale and forwarding planning.

There are lots of workings in pencil, showing that this edition of the plans was very much in progress and being adapted as and when. Perhaps following discussions with the Dean Guild who eventually provided approval? We can gauge the size of the Still area in this 1898 photograph: 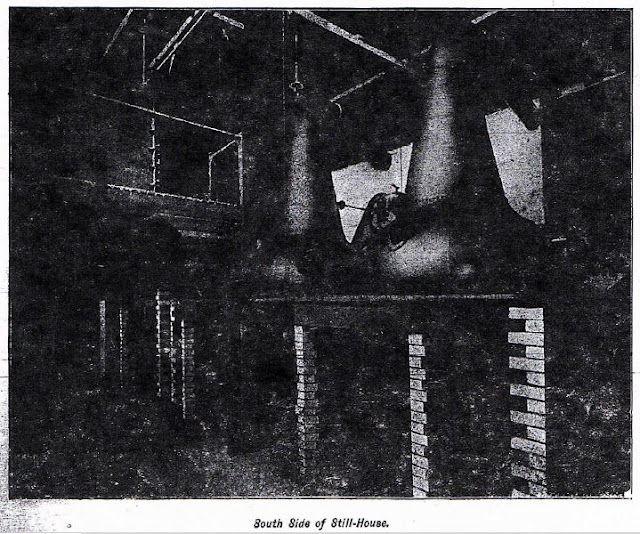 The plans match up nicely, showing us the platform and placement points for the stills. Behind this, we have the smokestack (or chimney) that was limited in size by the Deed Guild's pencil comments. This limitation may have impacted production, what would be interesting is to compare its height to others of the period, including Dallas Dhu, just to gauge how cutback it was. Could a shorter chimney affect how the coal-fired stills were utilised?
There is also another significant detail in pencil behind the stills in the yeast area, simply noted as a turbine. This is the entry point of the much-overlooked turbine that utilised the water power from the Caledonian canal to power the electrical lighting (installed in 1896) and the malt mill, malt elevator and mash tun. This remained the situation until 1954, when it was only retained to power the switchers for the washbacks until 1960. An environmental distillery, right from the off. 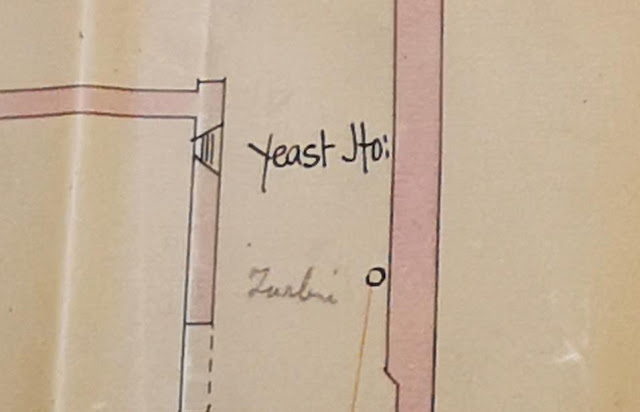 Looking at these original plans, you can see that the electrical power from the turbine would reach the mash house at least, before being modified, or perhaps noted just how much power the canal turbine would produce. As noted, this extra power was utilised just a couple of years later, with a visitor to the distillery in 1898 setting the scene:

'There the scene suddenly changed, and became one of bustle and activity. A dense steam rose forty feet into the freezing air, and the keen glow of the electric light was visible in various windows.'

The subsequent distillery tour, with John Birnie as the guide, underlines the value and pride in generating their own electricity, which is also highlighted by an 1896 newspaper article from the Northern Chronicle and General Advertiser that documented a lavish opening celebration. For our visitor, just a couple of years prior, the turbine itself formed part of the tour:

'The motive power is entirely obtained from a powerful turbine wheel, by Nells of London, driven by water from the canal, from which a headway of over thirty feet has been obtained. After passing the wheel the water is returned to the canal at a lower level. So abundant is the turbine power that it is also utilised to generate electricity, the entire Distillery being copiously illumined by the electrical light. Mr Birnie takes considerable pride in the installation thereof, and well he may, for everything connected with the electrical lighting, from the dynamo to the storage vessels, is beautiful compact, and so carefully arranged that its inspection affords quite a please to all who view it.'

The type of turbine remains unconfirmed for now, but Frederic Nells of London were producing the Victor turbine around this period as we can see below. This turbine could be singular or doubled up to offer more power. It seems very likely that they did not offer a huge range of turbine options, in what was a very limited market, but hopefully, I can confirm the exact type one day. The company exported to Europe and North America during this period, so it seems logical that Mackinlay & Birnie would place an order with such an established firm. 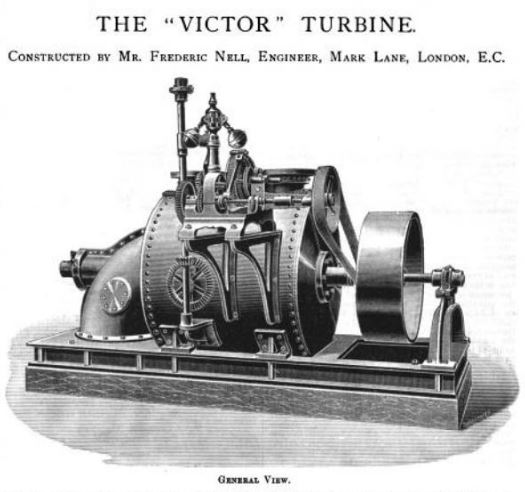 A single Victor type (as pictured above and dated November 1890) produced 100hp, these could be doubled up on either end to produce more electricity. A draught tube connected the turbine to the water source and the main shaft belt delivered the power. The turbine was noted to be 'of very solid construction' and gives 'great satisfaction'. And finally, as one of the original ambitions of this research, I'm delighted to unearth the original plans and bring these to a wider audience. The assortment of buildings and their original purpose has been a mystery, until now. These plans give us a strong foundation to make sense of all the subsequent additional buildings and changes that we'll be documenting here in 2022 and beyond.

We'll be taking a short festive break before returning in January with the first-floor plans from 1893.