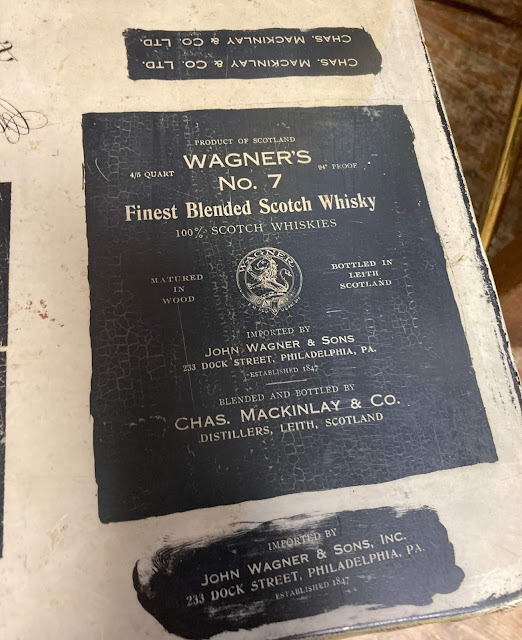 We're about to dissect the lithograph printing stone that we recently acquired for this project. You can read about the stone itself in an earlier article; going forward I've decided to devote an update to each of the labels on the stone. In theory, this should make things more cohesive and easier to follow.

If this Glen Mhor project has shown me anything, it is that new information is only waiting to be discovered.

We have some fantastic detail on this label relating to John Wagner & Sons, who were based at 233 Dock Street, Philadelphia and established in 1847. This retailer was known to work with the Mackinlay's across their book, including into 1917 on this specific V.S.O. bottling, with the suggestion that the importer closed for business in 1918. Great, you might immediately think, we have a potential cut off point?

Not entirely, as digging more reveals that the firm has a museum in Ivyland, Pennsylvania. There is an informative post on Digging in the Archives about the Wagner firm, confirming their address and when founded. The museum is an offline commodity, we don't even have an email address for preliminary enquiries. However, we know that it does possess the ledgers and even bottles of some form as part of the exhibits.

'They sold Cuban cigars, fine Spanish and French wines, and spices and tea from the East which came into the docks of Philadelphia and which the firm then often delivered to hinterland customers via pony express.'

A familiar outline, evocative of many wine and spirit merchants in Scotland. Many future independent bottlers, who started life along similar lines, importing the best for their clients. A good example of this is the original Gordon & MacPhail store in Elgin. The Wagner store (photograph below) endured until 1950 when it was demolished. Although reports suggest that the underground layers still endure to this day. It's existence until this time suggests that this family business continued long after the suggested 1918 closure date above. A possible explanation may have been a movement away from whisky and severance of such contracts with prohibition around the corner in 1920. 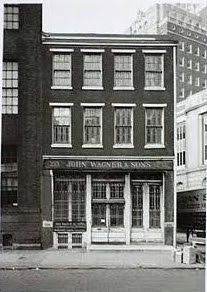 A Federal Trade Commission report in 1926 notes that John Wagner and Joseph W. Wagner are partners doing business under John Wagner & Sons. A list of patents from the same year, shows that the Wagner's renewed a whisky patent (57,616) on 13th November 1926.

In this detailed report on the history of this part of the city, on page 53, we can understand the transition of the firm in greater detail:

'Others were occupied by businesses forced to relocate to other areas or outside of Philadelphia. One such example is the firm of John Wagner & Sons which moved to Ivyland, PA after occupying a building on Dock Street for over one hundred years. Still other buildings had been recently constructed or renovated, with many years of useful remaining life.'

Although bordering the Dock Street Market area, only one building in the 200 block of Dock Street was engaged in the food distribution business. The earliest building on the block, at 233 Dock, had been occupied by the firm of John Wagner & Sons for over 100 years. In describing the property, appraiser Reilly stated the following: "The subject property is not only a local landmark in Philadelphia but the firm, John Wagner & Sons, which occupies the building enjoys both a national and international reputation as importers and exporters of cigars and spices... The so-called 'humidor' in the basement is reputed to be the only room of its kind in the country due to the peculiar atmospheric condition generated by a subterranean creek and regulated by dehydraters and humidifiers."

In a United States Congressional Serial Set (Volume 9800), John Wagners & Sons are listed as being importers of alcohol from France (442 gallons), Portugal (24), Spain (25) and England (204). This particular report was published on 22nd January 1934, showcasing that their alcohol importing continued much longer than initially thought. Now, you could suggest that 'England' wouldn't cover whisky, but I believe it does. Throughout this huge report of all the alcohol importers, Scotland is only mentioned by 1 as a direct source of spirits. All the others prefer to use 'England', and given this is the A-Z of American companies, there was not a monopoly on Scotch importing by Alliance Distributors.

What it also confirms, when compared to other companies within this listing, is that Wagner's were not a massive importer of any specific type of alcohol. Their intake seems more akin to the local greengrocers we would associate here in the UK. Serving a regional clientele, rather than a national demand.

There's another clue on the label, thanks to the generational family aspect of the Mackinlay's. Chas is often used as a short form for Charles. However, it isn't clear cut as we have two Mackinlay's with that name. The first is Charles W. Mackinlay, who was instrumental in enabling Glen Mhor to be built, by introducing John Birnie to his brother James Mackinlay. Unfortunately, this Charles died relatively young in 1896. This unexpected death, prompted James to take his eldest son (Charles Mackinlay) into partnership in the family business, also in 1896. To make matters even more confusing - if we needed it - the original Charles Mackinlay was the founder of the family firm, who passed in 1867. So, the name itself has a strong association with the company.

Considering all of this, I'd expect that Chas and any associated signatures (that we see of Charles on the Mackinlay releases) will relate to the original Charles, the founder. And if this is used throughout the decades and generations, it won't be of much assistance.

What is clear, is that the Wagner's continued to import whisky for longer than anticipated. More research is required around their patent and if we can find any materials relating to the No.7 whisky.

You can see our previous research on the stone label for F. Bucher & Co. Whisky.

My thanks to the Forgotten Whisky History FB Group for their assistance.