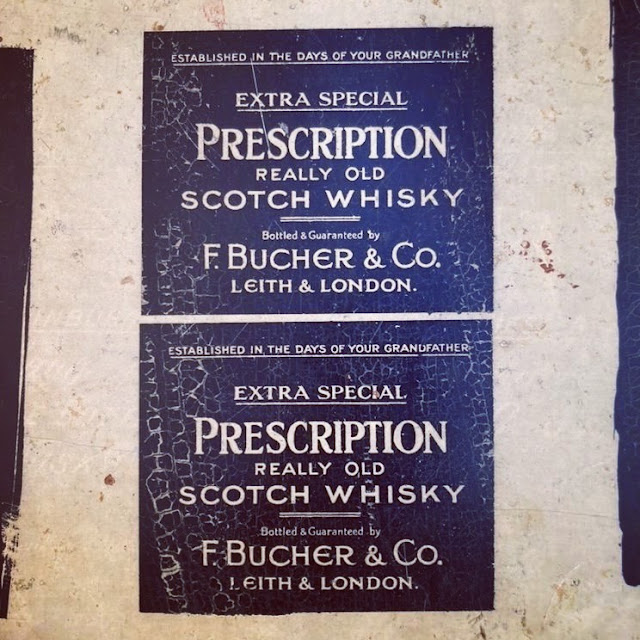 Here's another label from the Mackinlay's printing stone that we've acquired as part of this research project.

Based on my research so far, both companies were separate entities and remained family owned. It is reasonable to suggest that both merchants would have been known to one another. Possibly to the extent of using a local printer to create labels, or the Mackinlay's sizeable resources, offering the facility to F. Bucher & Co. for this really old Scotch whisky.

There's also the consideration that the labels on this stone might have been created at different times? A gap between 2 prominent labels was given to F. Bucher as a favour and helping out a local business? A possibility, but one we cannot confirm.

The label itself is simple but effective. 'Established in the days of your Grandfather' is so open ended that it means nothing, other than the suggestion that this brand isn't that old and is trying to increase its attractiveness by suggesting age and quality. The use of 'Prescription' would suggest a medicinal and health benefit. Immediately, you're drawn to the possibility of a Prohibition (1920-1933) bottling, where the medical prescription of whisky was possible. The L.A. Whiskey Society offer a background to prescribing in this period, although it is from a bourbon viewpoint, it does give us some context.

A famous beneficiary of a medicinal whisky prescription in 1931 was Winston Churchill, who was known to enjoy a dram of scotch on a daily basis.

But back to Francis Bucher & Co. Many thanks to the Forgotten Whisky History FB group that rallied and supplemented what information I had found. It is a great resource, as we all love a mystery and collectively our resources can pull together new understanding. So, how far can we go with this mysterious Bucher bottler? We could go into the birth's deaths, marriages and also playing rugby - as you'll see later on. However for now, we'll keep it simple, kicking off from the Edinburgh Gazette, January 1900, the dissolution of the partnership between Francis Bucher & David Smith Bucher. Unfortunately, there was no name change to help us in the quest to date the stone and/or prescription whisky: Francis Bucher then moved to bring in his son, Alfred, into the family firm as business continued as normal. Sadly, Francis passed away after a short illness in 1902, aged 68, as reported on the 1st of August: 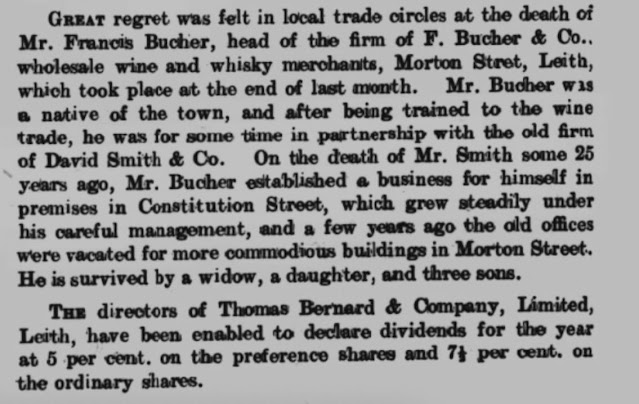 The clue in the above story is that the firm F. Bucher & Co. was established in 1877. Also, Morton Street no longer exists (thanks, Justine) and is now called Academy Street.
This is potentially the greengrocer store of the firm at that time, if you're in Leith it is always worth having a walk around and taking in the remnants of a bygone edge. Wee clues hidden here and there, and as we've shown here, all the clues add up! 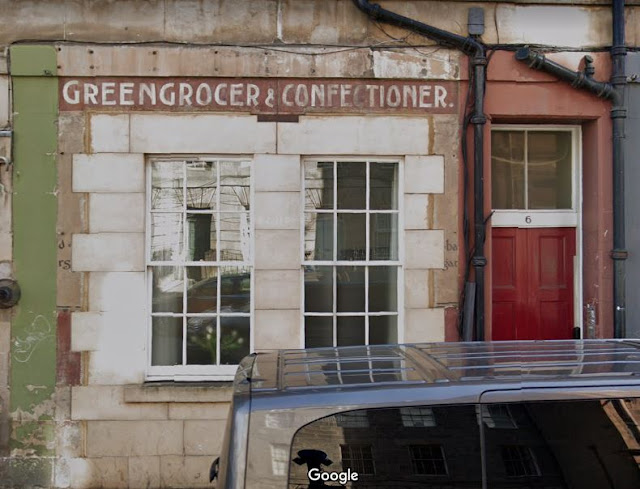 During October 2022, I was contacted by Mike as his great grandfather was Francis Bucher and he wanted to provide further information, which I'm happy to include below:
'Francis Bucher was in partnership with his eldest son, David Smith Bucher until the partnership was dissolved. His fourth son, Alfred Moore Bucher, was later brought into the partnership.
The reference to Bruichladdich relates to a "resurrected" (by my father, Alfred Melville Moore Bucher) F. Bucher & Co which, at the time, was part of the Invergordon Group. A fascinating article. I possess two "Prescription" engraved glasses and a very large F. Bucher & Co Victorian pub mirror.'
And also, some insight into the family including the love of rugby:
'The Buchers appeared to have been a pretty sporty family and indeed my grandfather, Alfred Moore was the rugby player, playing once for Scotland against England in 1897 and touring Australia in 1899 with a British Isles team, the forerunner of the Lions. He is Lion no. 69 in the 1888 Club listing of Lions players
Francis Bucher is listed in the 1871 Census as "Merchant" then in 1891 and 1901 as a "Wine Merchant". I know his father-in-law had been a grocer in earlier Censuses.
His son, David Smith Bucher,  b 1868, doesn't appear in the 1891, 1901  or 1911 Censuses. I believe he went to Argentina. By all accounts he was a bit of a "card"! He was the father of General Sir Francis Robert Roy Bucher.
Alfred Moore Bucher died just before the start of WWII and none of his three sons could keep the business going so it was presumably sold off, lock stock and barrel. My father, after he left the Army, went in to the trade and joined J G Thomson in Leith, becoming a director before leaving to resurrect F Bucher & Co under the aegis of the Invergordon group.'
Another obituary from the Leith Burghs Pilot in 1902, provides a more personal touch on the activities of Francis Bucher and his other efforts outside of a mere shop: 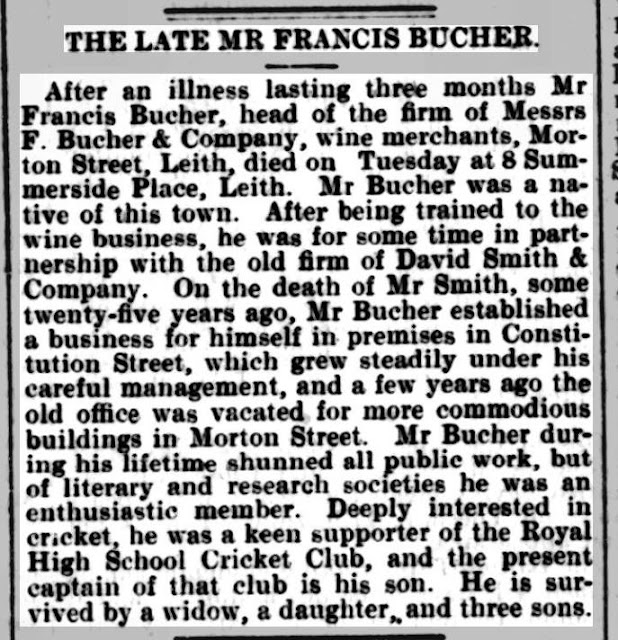 This gives us more context about his career, and may explain his appearance in the following news item published in 1865 in the Dundee Advertiser:

This could refer to the previous greengrocer of Mr Smith, where Francis learned his trade and £50 was quite a sum of money in 1865. An occupational hazard at the time, it did not deter Francis Bucher from learning his trade.

Jumping ahead, for the firm itself, it moved in August 1926, when their premises were purchased by the blending powerhouse of Arthur Bell & Sons Ltd. This would market the slow passage of fading into the background as many of these grocers and merchants became swallowed up, or could not compete, with larger firms such as the Walkers and Bells. On a side note, the name 'F Bucher & Company' did appear on a Bruichladdich bottling in the 1970s, but based in Glasgow. 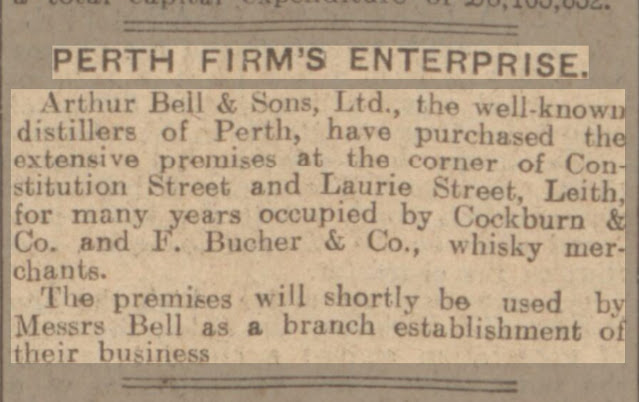 We know that in 1941, the firm would have potentially been located here on the map, and it is worth looking at some of the surrounding neighbours to see what a cluster of whisky activity this area of Edinburgh was at the time: 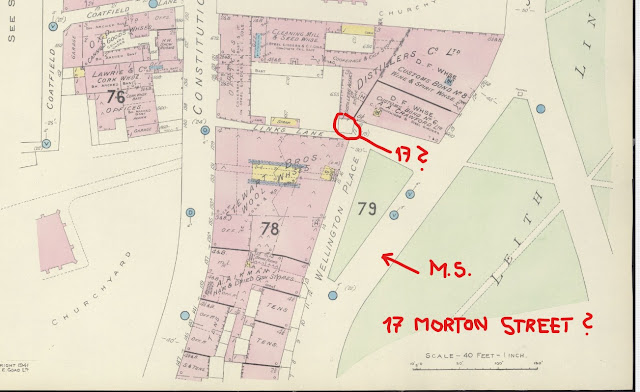 So, all insightful, but this doesn't give us much about this mysterious label or what F. Bucher & Co. were producing from their store. The following two discoveries give us much more on this aspect and provide more context as to what the stone label might be about.

Firstly, this advert for another of their blends, known as the 3 Star, which was apparently celebrated by many - indicative of the types of marketing and slogans so utilised by the industry:

This dates from the local press in 1905, and our other find heralds from this year as well. Suggesting that for whatever reason, F. Bucher & Co. were more active than normal in promoting their wares.

The other advertisement is from the Linlithgowshire Gazette (a town to the east of Edinburgh that was home to the St Magdalene distillery) and this allows us to draw some conclusions about F. Bucher & Co. alongside our the printing stone label: 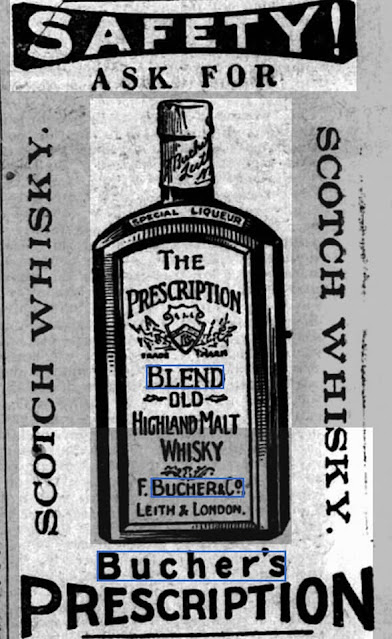 Yes, it is the blend we've been searching for after all this time. A different style of branding, but it is clearly one and the same. My conclusions would be that we can dispense with the prohibition aspect on this release, as F. Buchers & Co. were a small scale local blender. Scotland relied on these local outlets and their reach was limited to the surrounding area. As good as it seems to have 'Leith & London' on the label, there's nothing from the research to suggest that Bucher's was available outside of Edinburgh or nearby towns and villages.

'Prescription' may relate to the period that was being made available, during the late 1890s and early 1900s when consumer confidence was very low around whisky. Thanks to the Pattison Crash, where production dropped by a third in almost a decade, consumers were more dubious or wary of purchasing whisky. Giving something a medicinal aspect may have helped overcome such a belief.

The printing stone label is more simple, perhaps reflecting an earlier time when the Whisky Barons - or blends in general - were a little more restrained? The other labels on the stone may help us date this Bucher label in time but on what we've collated so far, I'd suggest that the label itself pre-dates 1905, but not by a significant margin.

You can see our previous research on the stone label for Wagner's No.7 whisky.