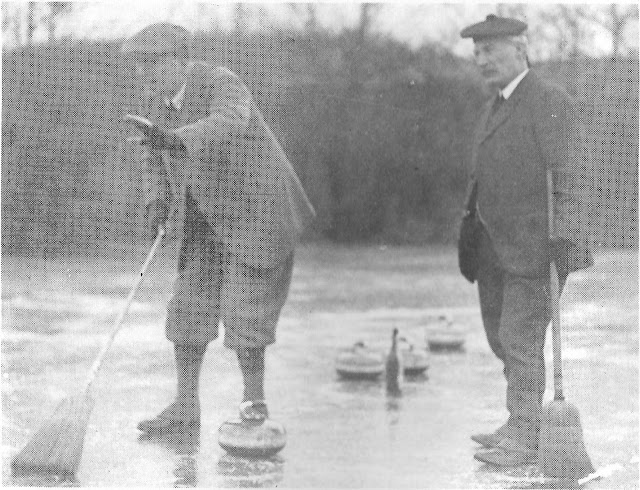 'A Bonspiel in January 1914. Mr A.N. Macaulay, the Duke of Sutherland's solicitor from Golspie, on the left, is giving his instructions. The rival skip is John Birnie, Balnafettack, Provost of Inverness, and owner of the Glen Mhor and Glen Albyn distilleries. The photo is by James Barron, junior, father of Miss Eveline Barron of the Inverness Courier.'

This was an unexpected and exciting find from a local book called Old Inverness In Pictures that was published by the Inverness Field Club in 1978. Sadly, it draws a blank on anything Glen Mhor specifically, but I then found the above image.

Now, there is a mistake in the quotation, as when this photograph was taken, John Birnie wasn't the owner of Glen Albyn - that was still a 6 years off. But it is an easy mistake to make. What it does show is the influence that John had already established in the region. A distiller by trade, he rose to become the Provost of Inverness and mixed with influential people of the region. Having the ear of the Duke of Sutherland's solicitor would be useful and indicative of how John was seen locally. An impressive feat by someone that started from a humble profession.

John served with the council until 1916 and is fondly remembered for many of his efforts during this time, as noted by ambaile:

'For sixteen years Birnie was a member of the Town Council. He served as treasurer for six years and as a magistrate for three. He was elected Provost in 1910, a post he held for six years. As Provost he took a leading role in organising aid for soldiers on active duty in World War I and in providing comfort for the bereaved.

Outside the council Birnie was a member of the Harbour Trust and of the Education Authority and a director of the Royal Northern Infirmary. He was involved with Freemasonry, serving as Worthy Master of the St John's Kilwinning Lodge and as Provincial Grand Master of Inverness-shire.'

What's the odds that John had a wee hipflask to keep his focus during this competitive match? And there's only one whisky that would have been inside it...