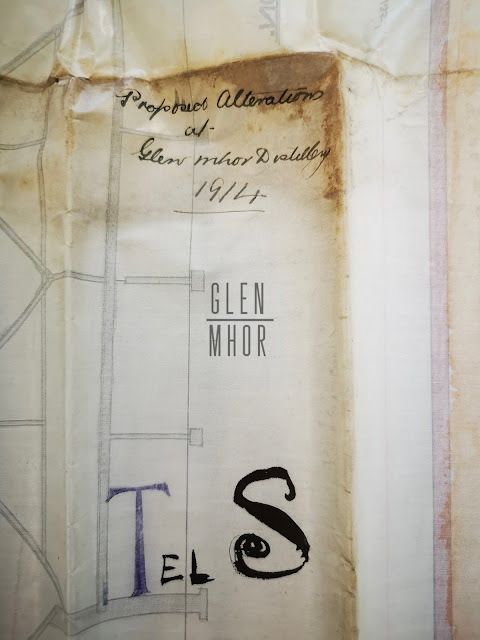 Our next instalment of Glen Mhor plans, takes us into 1914 and an application to extend to the existing warehousing. This would, in theory, complete the warehousing as we know it on site, by adding two new identical warehouses to the existing row, that famously backed onto the site of the Caledonia football ground, which you can see in the image below.

In fact, the two 1914 warehouses are in the aforementioned image, starting on the right hand side, and counting towards the left. Early on during this research project, I reached out to the Caley Thistle (as they are known today) forum for their own memories of the old ground and the distillery nearby, which did produce some imaginative examples, such as this one from a member:

'I must confess to having watched quite a few games from the roof of the warehouse of the Glen Mhor distillery in my time and more than once got a ticking off from one of the Caley committee when I decided to go legit and pay my way into Telford Street! Shame on me but I did have a cracking view....'

I believe more images exist thanks to the football ground, but reaching out to the community has underlined that very word; community. Both distilleries and the football ground were at the heart of the Muirtown area and prized by locals. I'm always adding more memories to our Quotes Section, so it is well worth a periodical visit. 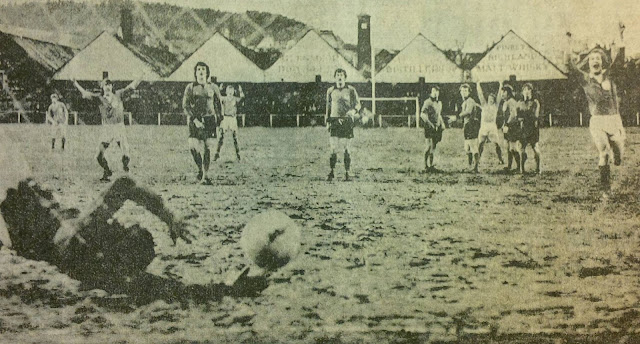 The warehouse plans were approved by the Dean Guild of Inverness on 4th May 1914, a time when tensions were running high and the threat of the First World War would soon affect distilleries across the country. Little did they know what awaited the country as a whole, and it seems business was good, as highlighted by Alan Winchester when we were discussing these plans:

'What is interesting about expansion in 1914, the industry had come out of a very quiet 1912, so this shows that Glen Mhor was in good health, showing that Mackinlay's and John Walker were doing well. If these warehouses were built, the maturing stock capacity would be important when the war came along and introduced minimum maturation ages. That's a real bit of history of course when downturn came in 1920s and 1930s, many of the closed sites were used for maturation and malting.'

Alan raises several good points, including the financial stability of the owners and if the warehouses were built in 1914? That's something we can answer for sure as you'll discover in this article. Our map section confirms the warehousing in place by the end of the 1920s, yet the prior map is from 1910, so we cannot pin it down further as of yet. Our definitive photograph section, also highlights a gap around this time. The reason for this I believe, is the advent of the First World War, and in particular, the use of Glen Albyn and Glen Mhor as a military base by the US Navy.

The recent discovery of the Glen Mhor article within the Distilleries of Great Britain and Ireland publication, confirms that not only were the warehouses in place by 1924, they also numbered 9 in total, rather than the 8 you can see, which is something I've explained in that specific article. So, we'll need to step backwards and uncover when these two planned warehouses did arrive, but thanks to this discovery, we understand they were in situ by 1924.

We also know from the publication that the new mash tun was installed shortly before the war. This is before the original documented date of 1925 that appears in other publications, if true then it shows 1914 was a busy year of upgrading Glen Mhor.

So, the US Navy presence might be seen as a hinderance in terms of research, but I view it as an opportunity, because the US military along with the UK government, would have documented both distillery sites with a few transforming these into the necessary resources to build mines.
Thankfully, the US Navy don't disappointment and provide a map that is from 1918. Therefore, these two warehouses would have been in place for at least 4 years, give or take. I believe there is more to come from the military aspect, as my research is going, however given the nature of map, its intend use etc. I do believe it to be 100% accurate for the period. For the record, Glen Mhor's warehousing is believed to have retained its original purpose and kept maturing stock for both Glen Mhor and Glen Albyn. In doing so, this opened up the Albyn site to become 100% devoted to the construction of mines.
I've always thought about the situation once the US Navy departed - a scenario that is outlined in some of our newspaper articles - as the distillery was delayed in returning to production, prompting the owners to seek damages from the UK government and this legal dispute was still ongoing in 1922. But legalities aside, the more physical task of unravelling all the maturing stock back to its rightful owners. Noting that by 1920, Glen Albyn would be purchased by Mackinlay & Birnie. 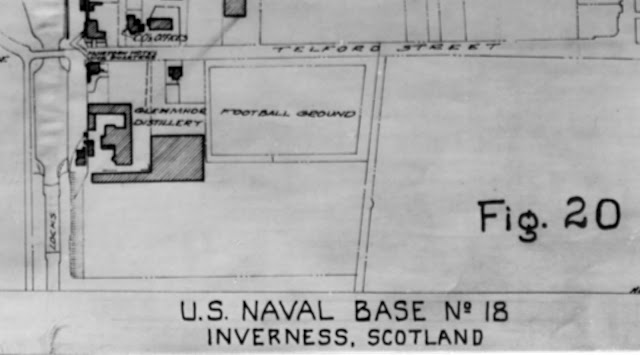 Clearly, the additional warehouses - despite being approved - were not constructed prior to the war, or during. Backing up this statement is another map from the neighbouring football ground of Caledonia F.C. In June 1920, the football team applied to the Dean Guild of Inverness for permission to build a new stand on the south side of the football ground, in doing so, their site map shows that the warehousing for Glen Mhor has not increased. 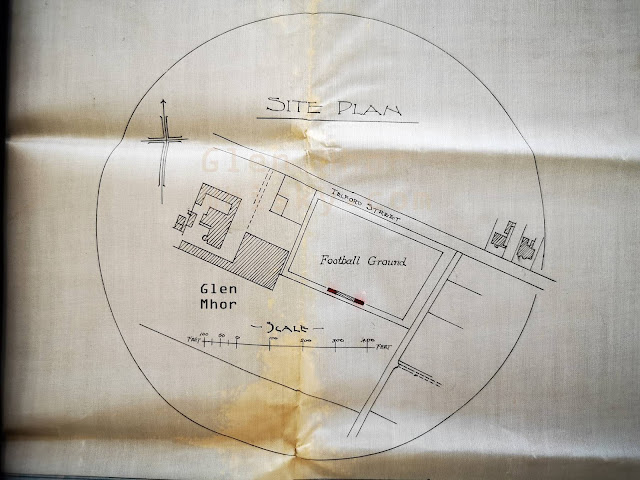 As you can see from the warehouse plans so far, there isn't much more that you can bring to the conversation. They are uniform as to what already existed on site already and also appear in our prior warehouse article and handy Distillery Info page that encapsulates all the details we've discovered. But to summarise:
Length: 135 feet 8 inches
Width: 62 feet
Internal floor space: 132 feet (meaning the walls were nearly 2ft thick)
Central support structures: 8
Windows: 2 at either end 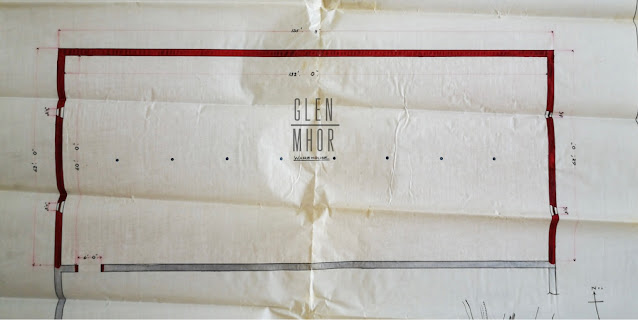 What's particularly interesting is whether these plans deal with two or four additional warehouses. I believe due to the colouring used on the two warehouses (on the left) that these are being added to the existing row. We also have the phrase 'proposed alterations' which might relate to an amendment to an existing submission? What we do know is that adding up all the warehouse plans that we have unearthed, if these plans represent warehouses 7 and 8, then we are missing numbers 5 and 6.
Sure, they are identical in dimensions, so it isn't a major loss, but when did these warehouses arrive? From the 1918 naval and 1920 football plans above, warehouses 5-8 have not been constructed and if the 1924 article is to be believed, these four missing warehouses must have been constructed between late 1920 and mid-1924. We also know that an aerial photograph taken on 8th August 1928 confirms all of the warehousing being in place.
There's also the possibility that at the time of the 1924 article being written and published, the warehousing was not finished, and the author has taken liberties to include future upgrades. This is certainly the case with the photograph of the still room that mentions 3 stills, while overlooking the fact that the third still clearly wasn't where it was destined to be situated. A little embellishment could remain a possibility, especially if the alterations were guaranteed.
There is a photograph of the distillery site that is the lead image in the article which is taken from the southern side of the site, looking north. It is an unimaginative angle, as it doesn't allow you to view Glen Mhor in its entirety, only the original #1 warehouse and the tops buildings thereafter. This perspective doesn't allow us to confirm the presence or truancy of the additional warehousing.
Then, we have the mystery of the actual site layout itself which comes with these plans that we've focused on: 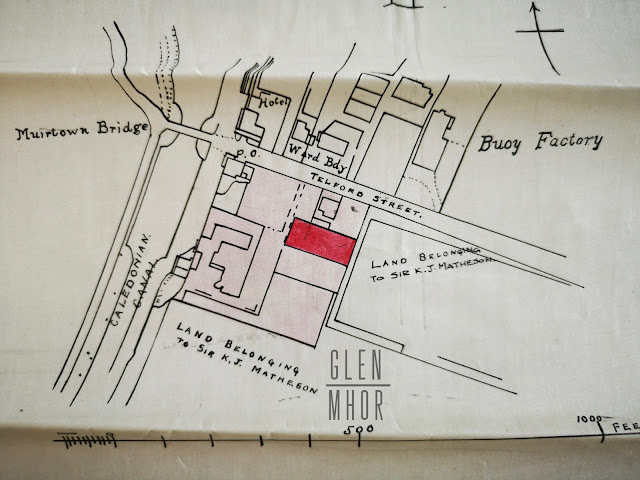 This drawing gives prominence to the plans only focusing on two warehouses, interestingly from the positioning, they are the final two that would be constructed at the distillery. The gap beneath is where #5 and #6 would be placed. I'm still open to the fact that the above diagram shows them or not. You can make a strong case for the warehousing being present despite the walls not entirely adjoining on the left hand side. Refer back to an earlier image and you can see #7 and #8 joining onto existing warehousing and not open ground.
In summary, I believe these 1914 plans were not fully implemented until 1920-1924. Several enhancements on site were delayed, not only in 1914 with the advent of the Great War, but those scheduled in 1898 due to a collapse in whisky demand. We are seeing that some of these improvements were drip fed into existence, almost as and when they were possible to introduce. Only through more research and a slice of good luck, will I be able to reveal more specifically when.

My thanks to Rose for working her magic on these photographs. We've watermarked the images from the Highland Archive Centre in Inverness to protect the originals, the plans themselves are referenced as R65 Telford Street - Dean of Guild Plans. As with any images on this website, please ask first before using and always give credit. My thanks to the Centre for their continued assistance.