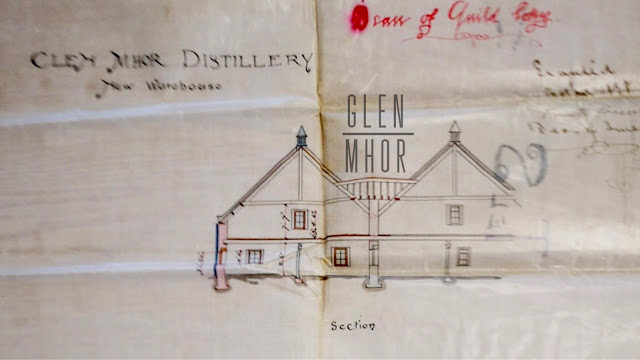 What is becoming clear about Glen Mhor as we unveil these historical plans in chronological order, is how much change there was at the distillery; almost from the off. We've documented the discovery of the 1895 original warehouse extension - something that's not been seen before - and the existence of a much smaller oddity warehouse at the opposite end of the site.

Continuing this theme of change, we don't need to venture too far ahead to reveal the next set of arrivals that commenced in 1898, or to be more specific 14th November 1898. The note on the outer page of this set of plans reads: Additions to Glenmore Distillery for Mackinlay & Birnie.

The arrival of this warehouse is actually well documented, as it was revealed in the Highland News on Saturday 19th of November, just 5 days later:

This would be the first - or would it - in a series of identical warehousing that would reside against the eastern edge of the site. Forming a stone boundary that would become symbolic to local residents and also supporters of the Caledonia football club, or visiting fans, as you can see in this photograph from Ambaile in 1950: 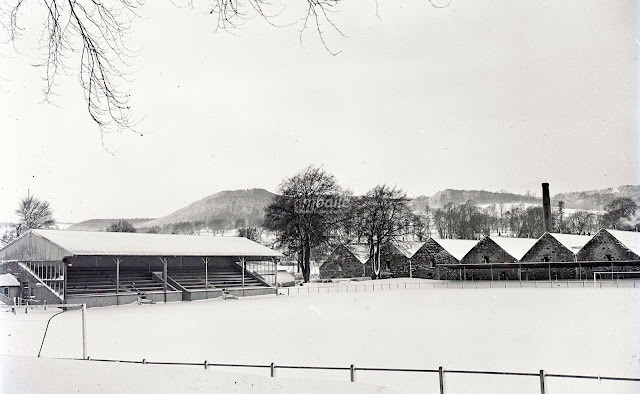 In these plans, we're dealing specifically with the warehouse that is the 2nd on the left - or are we as you'll soon see. The initial warehouse on the left is the original #1 warehouse that was extended in the aforementioned 1895 plans. It set a template (at least at the eastern edge) for the remaining warehouse that would follow. As far as we still know, it remained the largest warehouse because it ran the width of the site. In comparison, these warehouses could not achieve such a length because of the production buildings behind. This new warehouse would be 132 feet in length and 32 feet in width, setting the template for future warehousing.

If we zoom in, we can get a better idea of this corner of the site:

These plans are well detailed as they give us a cross section view, a northern elevation (which is side on, highlighting its length) and the west elevation. The latter is of particular interest as it's an angle we've never really seen on camera. The size of the original warehouse that enclosed the southern edge of the site meant that most images are taken from the north looking into the warehouse area. 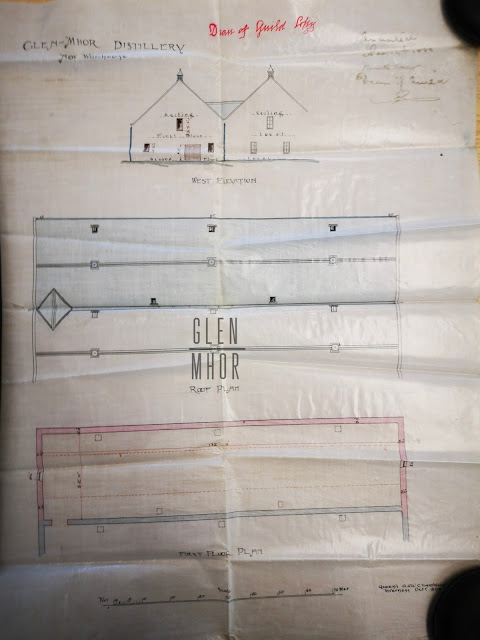 What the west elevation does confirm is that the warehouse is externally at least, a mirror of the 1895 extension. In terms of height and roof angle. There are subtle differences which you can see above with the 3 windows being more wider apart and of course there is a door, as the 1895 warehouse entrance was on the north side wall, as you can see below, : 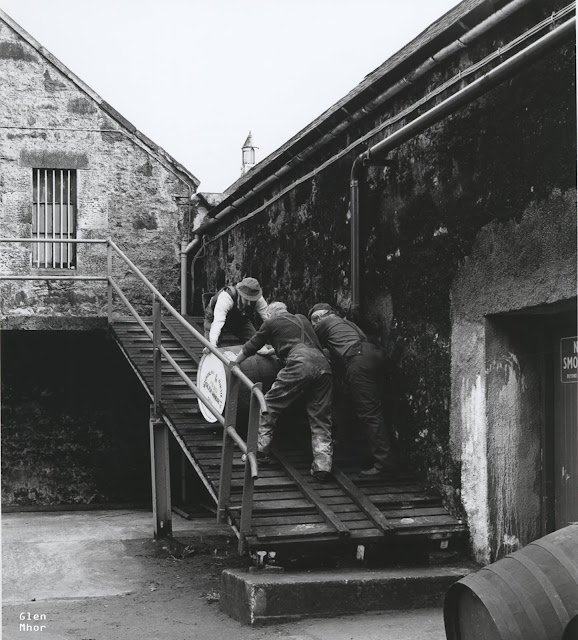 These men are rolling a cask past the original warehouse (on the right) where the door for it is at the base of the ramp. The warehouse in the backdrop is potentially the 1898 warehouse that we are discussing in this article. What's an additional interest is that the ramp would suggest that a new door was fitted at some stage to allow easier access. As this image dates from the 1970s, that allows plenty of scope for amendments (which we'll be discussing in future articles), or possibly, the later warehouses featured an upper access point. Time will reveal all... and using our library of existing photographs, the ramp was in situ in 1936. 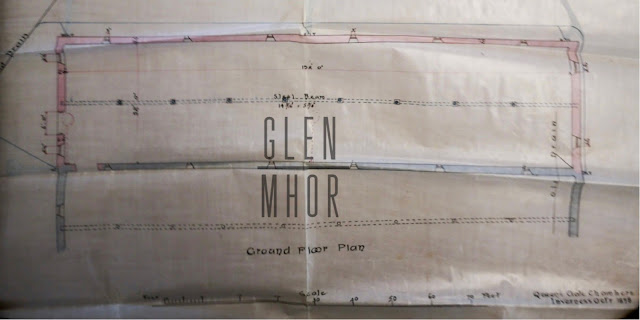 Now, what's really of interest in these 1898 plans is that in the site plan below seems to suggest that the warehouse addition will be adjoining a much larger initial warehouse. I do wonder if this is a mistake of some kind? As we know from the 1895 extension, this continued the straight lines of the original warehouse and nothing else. There was no application to increase the warehousing into the 'L' shape we seen in grey below. So, could this 1898 extension overhead plan be incorrect? 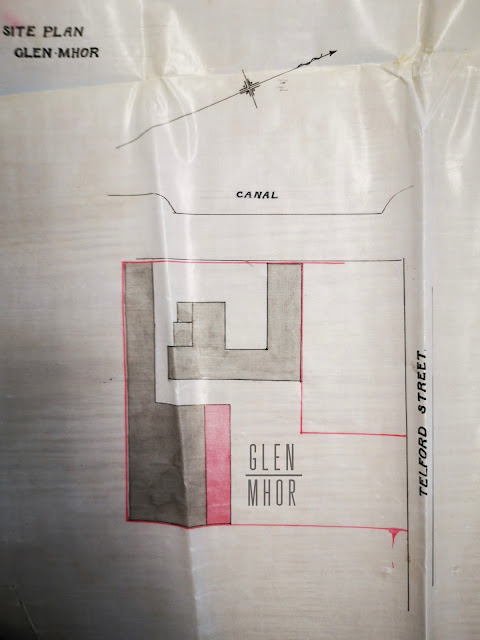 Could another 1 or 2 warehouses have been added in-between those dates? Or did the owners seizure an opportunity during 1895 to add more warehousing? The prospect of another warehouse had already stirred up a dispute with some local firms via the 1898 Guild Court Petition. Possibly, this ill-feeling was prompted by the prospect of a looming warehouse wall, or that Mackinlay & Birnie had already extended several times in a only a few years?

It is left to me to look at the circumstantial evidence and gauge what's possible. The Inverness Guild records I've seen in the archives, look fairly complete from the 1890's up until World War 2. The owners liked to publicise their growth and most developments do have some form of press coverage, there is a but which we'll come to.

The other possibility is that the 'L' shaped warehouse may have looked like a series of 3 individual warehouses externally, but internally, was one large warehouse. I think this is unlikely, but remain openminded as to the possibilities.

What is compelling, and what I believe is the most reasonable answer, comes via a very brief mention in the Northern Chronicle & General Advertiser for the North of Scotland, on Wednesday 6th January 1897 in our newspaper section and also in our very handy (for me personally) Timeline. The article talks about the rapid expansion of industries in the town:

'where the distillery and tweed manufacturing industries are located, the new buildings and extensions made during the year show that these pursuits are keeping pace with other activities of the town, Glen-Mhor Distillery alone being responsible for an expenditure of £1700 in houses and a bonded warehouse.'

Researching the firm, Ross & MacBeth, a forerunner to Alexander & Ross, who would work with Mackinlay & Birnie in the 1900s), revealed they submitted plans on 17th November 1896 for additional warehousing - the investment in the above newspaper article.

So, given all my research, I'd conclude that sometime in-between November 1896 and late 1897, mostly likely 1896, the warehousing was extended by 2 new warehouses. Meaning this 1898 extension is the 4th warehouse in the above Ambaile image. Given the confirmed costing of £1700 in the article and also the fee of £573 for this 1898 enhancement, it suggests more than 1 warehouse was built along with additional housing.

Again, going back to my opening theme, the builders must have been onsite almost permanently prior to 1900. Glen Mhor was rapidly changing and expanding. Where the 1896 plans are remains a mystery, but as you'll appreciate these things exist to be solved. I have seen some Glen Mhor plans appear on eBay over the years (but not in recent times), so could they have ended up on the secondary market?

There's also another nugget from the site plan drawing that might have been missed out, you'll recall the tiny warehouse that was mooted in 1895, which was to sit on the northern edge of the distillery site, bordering onto Telford Street? It's not to be seen anywhere on this new drawing, so that idea was possibly ditched. It did seem like an unusual option on the 1895 plans.

It's also worth highlighting that we do have further warehouse plans to bring you and other areas of the site, some of these drawings may hold clues to these new mysteries.

My thanks to Rose for working her magic on some of these photographs. We've watermarked the images from the Highland Archive Centre in Inverness to protect the originals which are referenced as R65 Telford Street - Dean of Guild Plans. As with any images on this website, please ask first before using and always give credit. My thanks to the Centre for their continued assistance.