Recruiting for the Territorial Force 1909 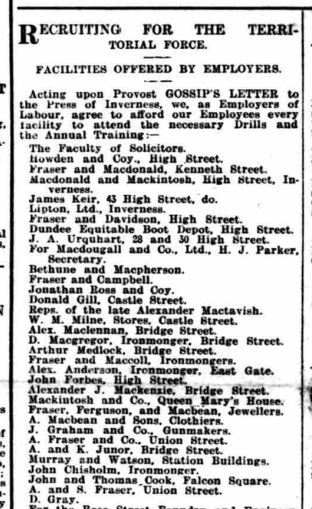 Appearing in the Inverness Courier on 9th March 1909, we have a statement of intent from local employers.

The territorial force was created by the UK government in 1908, this was an attempt to avoid conscription into military, by creating a readily available resource of trained men. These units were to be stationed in the UK and tasked with defending the country, rather than being deployed offensively abroad. However, members of groups, upon the advent of the First World War, wanted to be deployed to the front lines and for some units, this did happen.

It should be no surprise that Glen Mhor features, as co-founder John Birnie had strong links not only with the forces, but also the town council, as this record from Ambaile confirms:

'For sixteen years Birnie was a member of the Town Council. He served as treasurer for six years and as a magistrate for three. He was elected Provost in 1910, a post he held for six years. As Provost he took a leading role in organising aid for soldiers on active duty in World War I and in providing comfort for the bereaved.'

John would have been a member of the council at this time, and we've seen his prominence in society in later life. During the war, he would have been Provost of Inverness for a period of the conflict. So, the inclusion of Glen Mhor is almost a given. What is interesting by comparison, is the Glen Albyn entry... 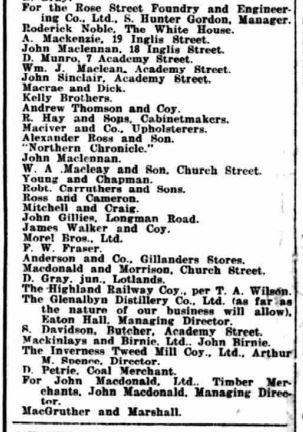 As it reads as far as the nature of our business will allow, which is the only company listed to include such a caveat. Whereas, across the road, Glen Mhor is essentially fill your boots. With John having ambitions of becoming the Provost of Inverness, he would have to be seen as supporting the national interest and the country. Yet it also explains his charitable work locally, during this period and thereafter for many decades.

So far, this research has not uncovered any Glen Mhor men that joined units and went to fight in the great war. This doesn't mean it didn't happen, as our Millburn research has highlighted the fate of the distillery clerk, Peter Rose, who did make the ultimate sacrifice in 1915.