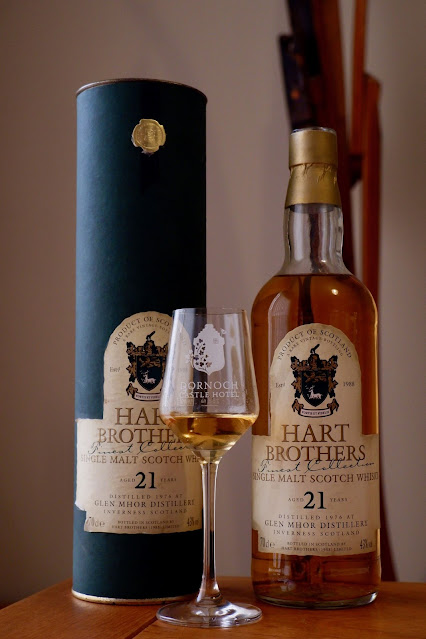 This is one of the whiskies I've selected for the sell out Edinburgh tasting on the 8th March 2023.

I'm always aware from prior experience that running such tastings, most things are condensed into the evening itself, meaning that time is limited to prepare and pour - you don't want any unforeseen obstacles. So, it makes sense to opening all 5 bottles a few weeks beforehand, not only to let the liquid settle, but also to treat myself to a pour and come up with the running order.

When dealing with bottles as old as these, there is also the likelihood of the cork being an issue. The majority will have dried out through time and inaction. And the last thing you want to do on the evening is have to deal with 1-5 problematic corks, in a bar area, with the clock ticking. For the record, the cork in the Hart Brothers release had completely dried out. I was able to deal with this easily at home with all my usual instruments and slow approach. Plucking a new cork as a replacement, I know that on the night, this bottle won't have any hidden surprises.

I had contacted Hart Brothers previously about this bottling to see if they could offer any information beyond what's on the label. Sadly, they were unable to offer any insight. I presume that's just the way of things with some indies and a lack of records. It would have been good to unearth some background facts such as the cask number or a memorable anecdote, but it wasn't to be.

What we do know is that this comes from a parcel of casks that Hart Brothers must have acquired from D.C.L. (Diageo) and bottled during the 1990s. Upon tasting we know that it is a refill bourbon cask of some kind and also reduced to 43% strength. Now, it is worth touching upon this as the modern whisky drinker will see such a reduction as a huge fau paux and an immediate turn off. I can appreciate why in our modern age of 46% and non-chill filtered as a core benchmarks, but this does underline some inexperience, so let me educate those readers a little.

There are some distillates that retain a remarkable complexity and strength of character at 40% and 43% strength. There are also some recognised by Gordon & MacPhail for this ability to perform extra long maturation periods before bottling. Having spent time at G&M and seen their Glen Mhor maturing inventory (or a selection of), the distillery does receive such maturation alongside blue chip names such as Glen Grant and Mortlach. Glen Mhor is still maturing in some warehouses in Scotland and that's a great thing, despite I'll never be able to afford it!

Back to the strength, the G&M Connoisseur Series was the first of its kind to showcase single malts from a range of distilleries. The majority of these were bottled at 40%, some distilleries faded under such presentation, others worked extremely well. You have to also remember cask strength just wasn't a thing back then and neither was the world of single malts. Glen Mhor is one of those distillates that does work at a reduced strength, so I'm never really concerned about a reduction if it has been done correctly and not hastily. 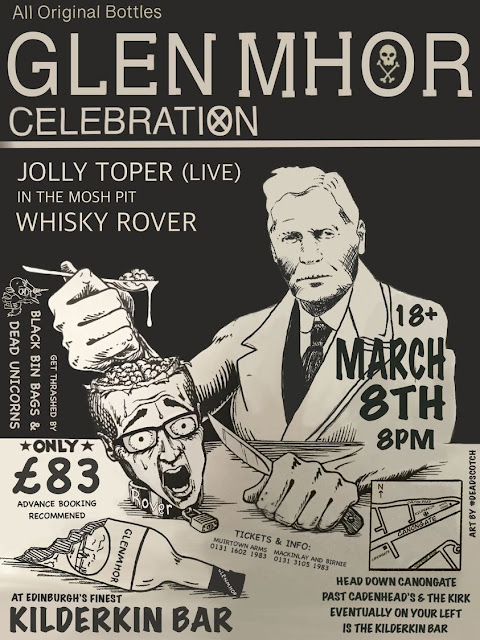 This 1976 cask would have been during the era of the Saladin Box on site and the distiller was likely to have been Angus Mackay, who seemed a character. It is an interesting period for the distillery and one I'd still like to unearth more with regards to the changes in production (if any) that D.C.L. made. We know that there was an increase in production as they needed Highland malt for their blends and an openness to selling casks to independents, after the official distillery bottlings were disbanded in December 1973.

1976 was also the year that Gordon & MacPhail launched their 8 year old bottling of Glen Mhor, stepping into the breach left by that previous decision to remove the official 6 and 10 year olds. This 8 year old has become the most prominent and widely available Glen Mhor, and for many will be their gateway into this murky world. Variable, I often see it as a calling card and test for those that wish to dig deeper, unfortunately I dug a little too deeply according to my wife!

As this forms part of the tasting, on the night I'll be taking notes from the attendees on what they thought of each dram and any memorable characteristics. It'll form an article on a group consensus of the whiskies and broaden our horizons rather than relying on just a couple of individuals for their opinion. But for what its worth, and very little in some people's opinions, here's what I thought of this Hart Brothers release. 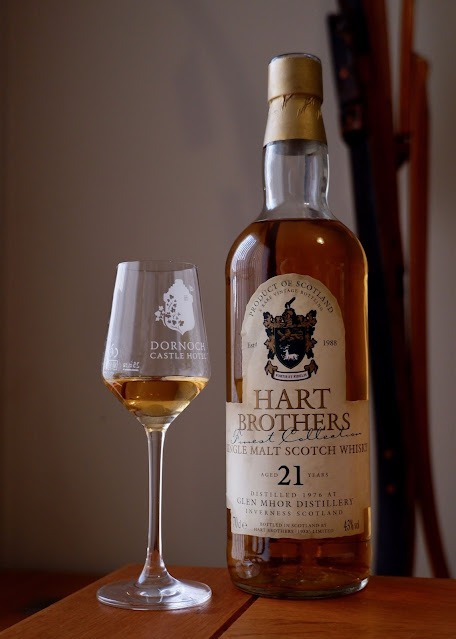 In the mouth: zesty and fully of vibrancy with fruit sugars. Vanilla sponge, creamy caramel and more strength than 43% suggested. Honey, green olives, apricot, lemon and a lingering wisp of smoke. Butterscotch, toffee and new wool follow. There's a pleasing lightness and almost 'approachable' aspect to this for a Glen Mhor.

The Hart Brothers according to Whiskybase, only released four Glen Mhor's and at least three were the 1976 vintage; the other is likely to be so as well So, a small parcel of casks were purchased and this 21yo is a lovely thing. Responding well to the lower strength, it retains its character and a pleasing array of characteristics.

What it does lack is the pronounced bonkers aspects we see of Glen Mhor's at a higher strength. Perhaps some of that youthful vibrancy has been left behind during its teenage years or the corporate guidance of D.C.L. Leaving us with a well established and tasty single malt.