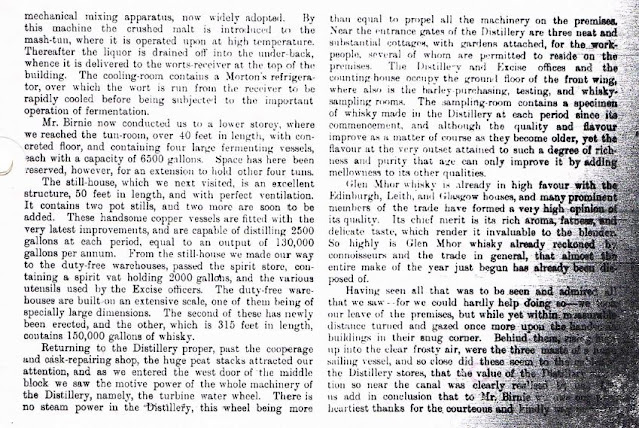 We're delighted to be able to bring you the previously missing 1898 Trade Supplement that introduced Glen Mhor, a new distillery, to a wider audience. My thanks to Alan, for providing this wonderful account. We've already covered page 1 and also page 2 in great detail.

Now, here's the text from page 3 for your reading pleasure, including some additional notes. The image on this page was of the Mackinlay's & Co. No.1 Duty Free Warehouse in Leith, as it's not on the Glen Mhor site and is quite a poor copy, I've decided not to post it here. Page 4 is much shorter, as you'll soon see in our next post.

The page 3 tour and description are quite detailed, from this, it should be possible to identify most of the buildings from maps from this period - something I'll be looking to do in the coming weeks...

'mechanical mixing apparatus, now widely adopted. By this machine the crushed malt is introduced to the mash-tun, where it is operated upon at high temperate. Thereafter the liquor is drained off into the under-back, whence it is delivered to the worts-receiver at the top of the building. This cooling-room contained a Morton's refrigerator¹, over which the wort is run from the receiver to the receiver to be rapidly cooled before being subjected to the most important operation of fermentation.

Mr. Birnie now conducted us to a lower storey, where we reached the tun-room, over 40 feet in length with a concreted floor, and contained four large fermenting vessels, each with a capacity of 6500 gallons. Space has here been reserved, for an extension to hold other four tuns².

The still-house, which we next visited, is an excellent structure, 50 feet in length, and with perfect ventilation. It contains two pot stills, and two more are soon to be added³. These handsome copper vessels are fitted with the very latest improvements, and are capable of distilling 2500 gallons at each period, equal to an output of 130,000 gallons per annum°. From the still-house we made our way to the duty-free warehouses, passed the spirit store, containing a spirit vat holding 2000 gallonsª, and the various utensils used by the Excise officers. The duty-free warehouses are built on an extensive scale, one of them being of specially large dimensions. The second of these has newly been erected®, and the other, which is 315 in length^, contains 150,000 gallons of whisky.

Returning to the distillery proper, past the cooperage and cask-repairing shop, the huge peat stacks attracted our attention, and as we entered the west door of the middle block we saw the motive power of the whole machinery of the Distillery, namely the turbine water wheel. There is no steam power in the Distillery, this week being more than equal to propel all the machinery on the premises. Near the entrance gates of the Distillery are three neat and substantial cottages, with gardens attached, for the work-people, several of whom are permitted to reside on the premises. The Distillery and Excise offices and the counting house occupy the ground floor of the front wing, where also is the barley-purchasing, testing, and whisky-sampling rooms. The sampling-room contains a specimen of whisky made in the Distillery at each period since its commencement, and although the quality and flavour improve as a matter of course as they become older, yet the flavour at the very outset attained to such a degree of richness and purity that age can only improve it by adding mellowness to its other qualities.

Glen Mhor whisky is already in high favour with the Edinburgh, Leith and Glasgow houses, and many prominent members of the trade have formed a very high opinion of its quality. Its chief merit is its rich aroma, fatness and delicate taste, which render it invaluable to the blender. So highly is Glen Mhor whisky already reckoned by connoisseurs and the trade in general, that almost the entire make of the year just become has already been disposed of¤.

Having seen all that was to be seen and admired, all that we saw - for we could hardly help doing so - we took our leave of the premises, but while yet within a measurable distance turned and gazed once more upon the handsome buildings in their snug corner. Behind them, rising high up into the clear frosty air, were the three masts of a high sailing vessel, and so close did these seem to the ???? Distillery stores, that the value of the Distillery location being so near the canal was clearly realised by us. Let us add in conclusion that to Mr. Birnie we owe our heartiest thanks for the courteous and kindly way...'

¹ This technology has been largely replaced since in favour of modern heat exchangers. Edradour is the last noted distillery to continue its use, possibly because of its small size. To read more about Morton's, the Whiskipedia has an excellent article.

³ Clearly throughout this tour, there is a confirmed focus on expansion. This would have been paused with the pending Pattison Crash, which depleted demand for whisky and consumer confidence. Then, with the arrival of World War 1, only 1 still was added in 1925.

° This is consistent with what we know, Glen Mhor didn't max-out capacity until the 1970s.

ª This piece of equipment appears in a 1950s photograph confirming its capacity remained the same and likely it endured throughout Glen Mhor's lifespan.

® This is the additional bonded warehouse, added in 1897 with additional housing at a cost of £1700. This we believe is the start of the warehousing forming a boundary with the football ground behind. You can see this via the 1902 drawing on our Map Section. Another warehouse was given planning approval in November 1898.

^ This is the original warehouse, that runs the entire width of the site, forming the outer wall on the south side. Again, you can see this in the 1902 map.

¤ This is reflected in the scientific research and surprise at the Shackleton whiskies, analysed at the turn of the millennium after their discovery - details of which are available in our Documentation section, under 1907. Whisky from this period would likely have been in Shackleton's order. The need to expand production and capacity is very clear given the demand from the industry.