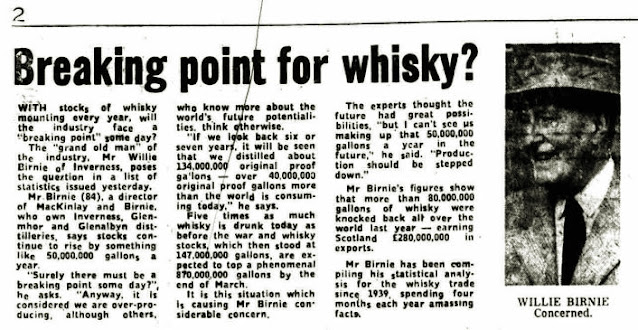 Published in the Aberdeen Press & Journal 15th January 1972, this brief article is a fascinating insight into William Birnie's work, but also reads as his swansong as later in 1972, both Glen Albyn and Glen Mhor would be sold to the Distillers Company Limited.

The business of distilling was reaching breaking point as the article suggests, Glen Mhor was struggling to obtain orders for filling and competition was fierce.

'Surely there must be a breaking point some day?'

'Anyway, it is considered we are over-producing, although others, who know more about the world's future potentialities, think otherwise.'

This statement is interesting, as we know Willie had been warning about overproduction since the mid-1960s, while others (including D.C.L.) were expanding existing and building new distilleries. William's view was seen to be at odds with the industry forecasters, despite his unique combination of statistical analysis and industry experience - the latter taking insight beyond a spreadsheet.

His question is simply who is going to consume this excess? Some will be sitting on shelves, but the majority of these spare resource will be sitting in warehouses across Scotland with nowhere to go. Eventually, pressure will grow and something has to give in the end. This was the era of whisky drinking, as opposed to today's focus on collecting and investment.

This was the only sensible precaution to avert disaster before matters were taken out of the hands of the major producers, who continued to produce on excessive scale. It was this focus that prompted so many distilleries across Scotland in the hands of corporations in the late 1970s to reduce to part-time production, then followed by closure in the 1980s.

While many of these distilleries may have closed eventually due their ancient nature and value of the land they resided upon, it seems sensible that several could have endured and prospered in the new age of single malt appreciation.

Mr Birnie has been compiling his statistical analysis for the whisky trade since 1939, spending four months each year amassing facts.

This final paragraph underlines the effort that William put into his work annually and its duration. Debuting in 1939, if this is to be believed, we have the inaugural edition of his statistical analysis on this website. With a further edition from 1946 and hopefully through our continued research, more editions can be identified and brought into the public domain as part of our efforts.