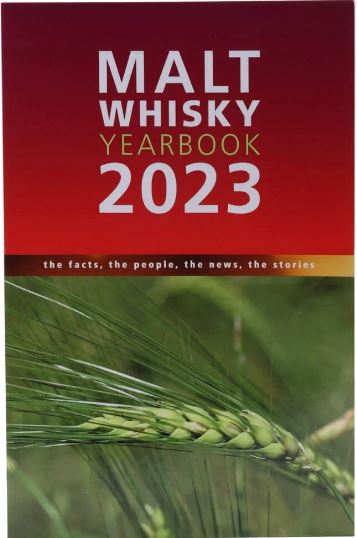 An annual highlight for many whisky enthusiasts is the publication of the Malt Whisky Yearbook, which is available from all good readers including Amazon¹.

For as long as I care to remember, this was an essential purchase in my own schedule. In recent times I've transcended the whisky scene and focused more on this Glen Mhor project, in doing so, the annual necessity has waned. That's not a criticism of the publication, instead I wanted to set my own perspective out from the very start. I can appreciate why many who are connected, and part of the whisky scene, do look forward to this annual update and catch-up on all things whisky related.

The problem being, when does a handy yearbook become too big or bloated? With so much happening on a worldwide scale, it is a thankless task. Space is not infinite, and things have to become vanquished, or at least condensed. That is especially true of the closed/lost distilleries of Scotland that have suffered once again, this time thanks to the onslaught of new distilleries across this nation and further afield.

Closed distilleries were one of the initial aspects of whisky that caught my attention back in the day. Added to my genuine historical interest of all things since school, their presence lured me into this murky world of brown liquid and deceased icons. So, it was sad to see their importance marginalised in later editions of the yearbook, for entirely understandable practical reasons.

Yet, I suspect, there is a simmering frustration with whisky today, which is so efficient and refined, that that the rollercoaster effect has been lost. From the old school fruit bombs to the more difficult holes in the road. It is an endless journey for me, and each destination is appreciated, as is every bump. This has prompted a guaging of the past and exploring the whiskies from these lost producers.

Nowadays, I only tuck into the yearbook once every few years, as ultimately little changes outside of new marketing strategies and release concepts. It is a resource that I need only to partake in, every few years, for my focus is elsewhere. However, thanks to the keen eye of Mark Davidson who highlighted this page in the 2023 edition, which was a pleasant surprise and to Ryan for the image used below². What I thought would be of interest, is a look at the article and provide more context and commentary, thereby enhancing your appreciation and knowledge of Glen Mhor.

There is a trend, or more likely, a fate in whisky books, where the same resources are utilised, and those details are redistributed and communicated over subsequent decades. If the source text is incomplete or inaccurate, what might not be quite so, eventually becomes accepted as gospel, thanks to the overwhelming regurgitation. I'm sure you'll recognise this behaviour from certain politicians nowadays and the new dawn of fake news. But in whisky terms, it is far more innocent, as very few writers have the option to sit down and research from scratch.

An added twist comes in the form of our new appreciation of whisky, as enthusiasts and the general public who are more aware of it nowadays than ever before. This also applies to librarians, relatives and descendants of employees and archivists. More materials have become available thanks to the plundering of stores and the adoption of the digital medium. Today, might be a rich time for whisky drinkers in terms of choice, but for those dedicated to unearthing the past of scotch, it is truly a remarkable period because we have to start again in some cases. 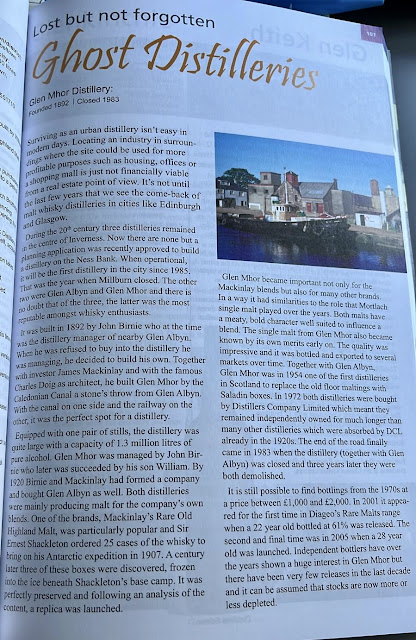 The value of land is well made, it is what saved Brora from destruction as if that distillery was located in a city, it would have been demolished decades ago. Unfortunately, Inverness for what it was during the 80s was expanding rapidly. It still is in some respects, but the expansion has focused on nearby settlements that are growing towards the city.

However, Millburn isn't what I would deem in the centre of Inverness, and neither are Glen Albyn and Glen Mhor. Millburn was in its own right a village and still sits on the eastern edge of Inverness. Whereas the other two fallen distilleries resided in Muirtown; a viable and long-established community that was eventually engulfed by Inverness. You can get a sense of that slow creeping of the city in our Photograph section.

Glen Mhor has received plaudits from several enthusiasts I know, but it remains a hard sell, arguably overlooked by some of the major whisky thinkers and communicators. The same can be said for Millburn, which does have its hardcore fanbase and Glen Albyn. The latter being generally regarded as blending material by its owners, despite some memorable whiskies.

Charles W. Mackinlay made the introduction between John Birnie and his brother, James Mackinlay, which would ultimately begin the Glen Mhor journey. This is an area that is still relatively unknown, but what is clear is that the Mackinlay's needed Highland malt for their blending operation. John was an ambitious individual and extremely skilled distiller. What capital (if any) he brought to the partnership is a mystery, but from my research they do seem to be equal partners. This is certainly an area that I wish to unearth in 2023 and beyond.

The canal was a potential entry point for goods and materials. Research so far as confirmed that the Caledonian canal itself was not utilised for this purpose. Instead, goods and materials arrived via the Muirtown basin, with smaller loads being delivered via the quayside beside the distillery. More substantial goods were unloaded nearer Glen Albyn, which did have a small railway that accessed the mainline. I believe this extension to the existing network was constructed as part of the US Naval Base during World War 1, to enable parts to be shipped more efficiently.

Quite often missed in the texts is that Glen Mhor actually had three stills. The third arriving in 1925, although there are conflicting dates. As we'll show in a subsequent update, this new arrival took over and triple distillation was not practised at the distillery. Although, the still it replaced remained in situ and on standby. We have discovered the details of the third still which were previously lost, and this photograph actually includes William Birnie.

While Charles C. Doig designed the distillery, John would have taken control of the internal layout and production facilities. There was a great deal of surprise when the original Shackleton bottles were sampled and analysed. The quality of the whisky redefined what was expected of this era and underlined the skill of John Birnie and his team, as the scientific report states:

'The results presented here significantly change our perception of the quality and character of Scotch malt whisky produced over 100 years ago. Malt whisky from this period was generally regarded as robust, peaty and too ‘heavy’ in style for ordinary consumption. Our analysis however describes a surprisingly light, complex whisky, with a lower phenolic content than expected. The first season for the Glen Mhor distillery was 1893–1894 and so the matured malt whisky they supplied to Mackinlay was relatively new to the market when Shackleton ordered 25 cases of it for the Antarctic expedition of 1907. We are therefore indebted to Sir Ernest Shackleton...'

Glen Mhor can be many things, from meaty and savoury, to challenging and often inept. It represents the whisky rollercoaster I hinted at earlier, with bumps and crescendos galore. We've shown through various newspaper articles from America to Australia, Glen Mhor reached several international markets. Italy remained a popular destination and today is a source of many bottles appearing on the secondary market. Yes, bottles can go for the prices quoted, but in general, the majority remain under £1000 if you shop around.

On the topic of stocks, Cadenhead's have one cask remaining that I have sampled previously, and Gordon & MacPhail certainly have several maturing casks from my visit to their operation pre-pandemic. I'm sure casks still exist within Diageo and perhaps a couple elsewhere. Glen Mhor lives on and is increasingly celebrated, which is heartening, and I welcome such features within publications such as the Malt Whisky Yearbook, raising awareness of this lost distillery. Despite its fate and obscurity, Glen Mhor is just one of several closed distilleries that warrant a greater appreciation and historically, more research.

¹ This is a commission link to help the Glen Mhor research coffers, but you shouldn't find it hard to find a copy of the book near you.

² Hopefully this image is ok to publish and if you're interested in the yearbook, then please pick up a copy.