Researching the stone: Scotch Whisky A Blend 8yo 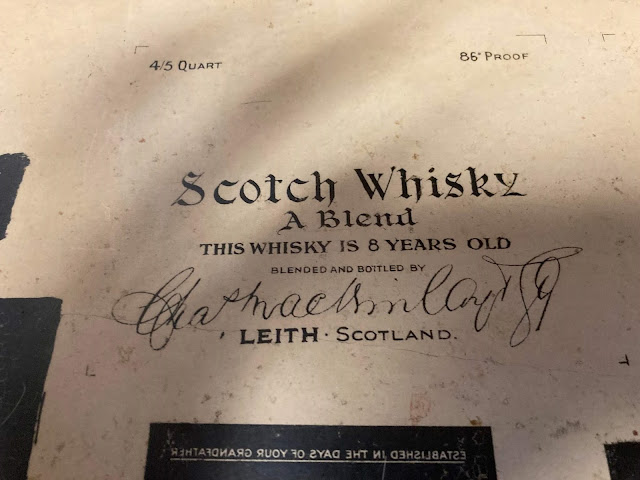 Regulars will know one avenue of research lately has focused on the discovery of a printing stone that featured the Mackinlay's V.O.B. bottling alongside others. The ambition is to try and date the stone as much as possible.

We kicked off with Wagner's No.7 which was an export bottling and to a local importer in America. Their label featuring Charles Mackinlay, who is consistently mentioned on the Mackinlay bottlings and was instrumental in their success. The importer was working as late as 1918 with the Leith blender and the arrival of prohibition would have put a new spin on any relationship. So, this label suggests a pre-1918 usage and as it also features distillers on the design, therefore we know it is post-1892/1894 when Glen Mhor was built/started production.

The second label was more local to Edinburgh and the blending community of Leith. F. Bucher & Co. Extra Special Prescription Really Old Scotch Whisky. The outcome of quite a sizeable piece of research was the belief that this more simple label predates 1905, when a more elaborately styled bottle was being advertised. So, we're zooming in on a period 1892-1904 for the stone. But what of the final label that is specific to a Mackinlay core offering?

Firstly, there is this generic label which really doesn't tell us much at all: 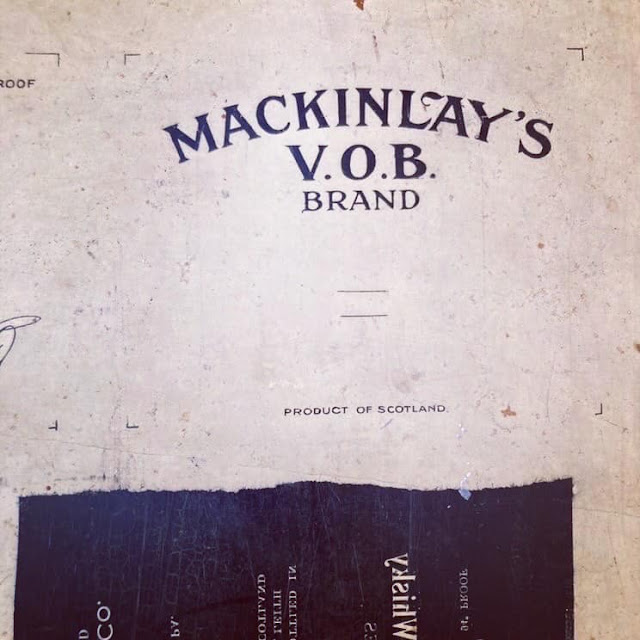 V.O.B. or very old blend is arguably the firm's most recognised range and we've already reviewed an edition in our whisky section, with more to follow.

What's of more interest is the inclusion of an 8 year old blend label (lead image) from Mackinlay's on the printing stone. This isn't a regular bottling that you see nowadays, whereas the V.O.B. crops up on the secondary market now and again. We know from the research that filling cask orders was a major part of Glen Mhor's business and it supported several malts as our Distillery Info page and Highland Railway invoices showcase.

You'd think the signature is a great guide, but generally on the bottles that the Mackinlay's bottled, the sig remained a constant. Despite the label going into the 5th generation until its retirement. The generations are highlighted in this great newspaper advert from the Daily Record in 1975: 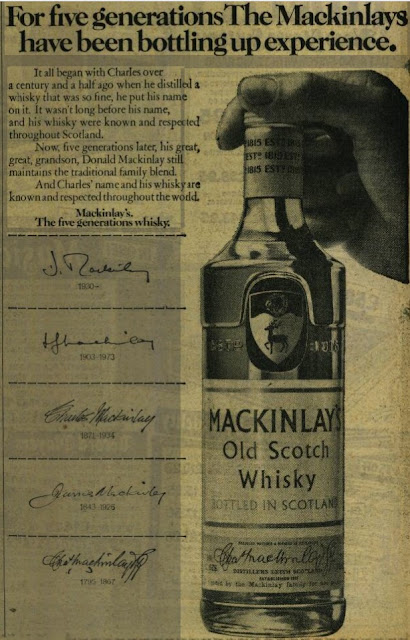 Very handy, especially as I have a flight of Mackinlay bottles to review including the deer icon styling above. That's for another day, but the advert confirms it is the original founder's signature that graces the bottle. There's no way that the stone comes from his era, noting he passed away in 1867. So, that's nice to know but no context here.

Sadly the 8yo label doesn't mention the generation either, so we're not getting anywhere fast, but thanks to the Forgotten Whisky History Facebook group, who live for challenges such as these. The geeks geeks if you prefer, tracked down a mention of the lesser seen 8yo blend that dates from 1915 and the Lincolnshire Echo: 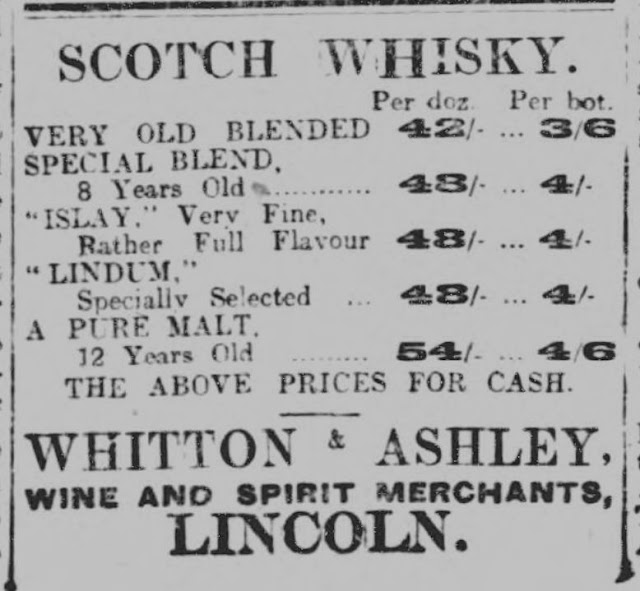 There it is at the top and for a reasonable price. This 1915 time frame, is certainly within the scope of where the stone could be in use. What we don't know is for how long the 8yo was in production, including its debut and final release. These details may become more apparent when I start to dig into the company archives in Glasgow - just haven't made it there as of yet. One motto worth remembering when doing these projects is; one archive at a time. So, once I've exhausted one location, we'll move on and so on.

What is of interest is the fact that the aforementioned Wagner's were also selling an 8 year old blended Scotch whisky in the V.O.B. styling, but as of yet I've yet to place a timeline on this bottling. From images I've seen, it is certainly later, either pre-WW2 or just afterwards. My initial thoughts are that this 8yo we're chasing on the printing stone was an earlier forerunner to the V.O.B. release and that it was replaced by it.

So, revisiting all the information we've gathered on this printing stone, if you were to ask what era it dates from, I would suggest the early 1900s to 1915. Soon the end of this style of printing labels would come to an end with the arrival of the self-adhesive label in the 1930s.

I don't think we've fully cracked the secrets of this stone, but I do feel confident in where I'm placing it and I also feel it is unlikely they reused the stone and repainted newer labels or additions onto it. The labels all seem from around the same period and were in circulation at this time. One thing I have learned during this Glen Mhor project, is that things change with new discoveries - so, I believe we'll be revisiting this stone again in the coming years to shed new light on its history.