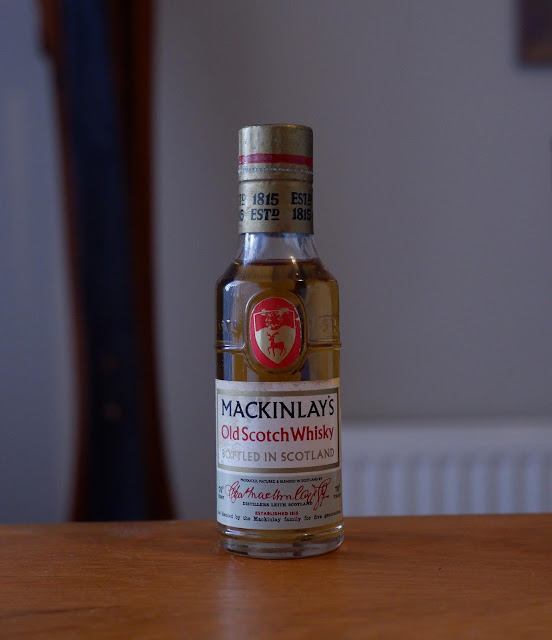 We're stepping into the 1970s with this bottling of Mackinlay's Old Scotch Whisky. This is the tail-end of the Mackinlay brand, which has since faded from public consciousness.

Bottled at 70 proof (the old English standard) means this was pre-1980, although you don't divide it by 2, as we do for the American proof system. If you did, the suggestion that the alcohol strength within is just 35%, has caused confusion previously. Instead, you have to divide by 1.75, just because and that gives you... 40%. Yeah, I know, we have to be different.

I see this Old Scotch Whisky as a continuation of the V.O.B. (very old blend) that was the original series from the Mackinlay's - this is underlined by the 'as blended by the Mackinlay family for five generations' statement on the label. I've reviewed a 1960s bottling and you can see some similarities with the signature of the founder being prominent on the label. I've also explored a more recent 21 year old Mackinlay. This 1970s edition is arguably the most common example that you'll stumble across in miniature form or a full-sized bottle at auction, or just by random luck. A visit to eBay will confirm a huge number of promotional items that have since littered the world to sell such bottles.

Charles Mackinlay & Co. were acquired by Scottish Newcastle Breweries Ltd. in 1961 and this move into the corporate sphere prompted a variety of owners as parent companies were acquired by ever-growing spirit focused giants. In 1974, ownership moved to Waverley Vintners Ltd, so potentially this edition was bottled during their tenure.

What matters is the quality, and by definition, potentially a reflection of the lack of stability, the Mackinlay range in the 1970s isn't perceived to be of the highest quality. Batch variations are also apparent in my experience, leaving us with a sense of a slow decline and a bitter end to the brand. 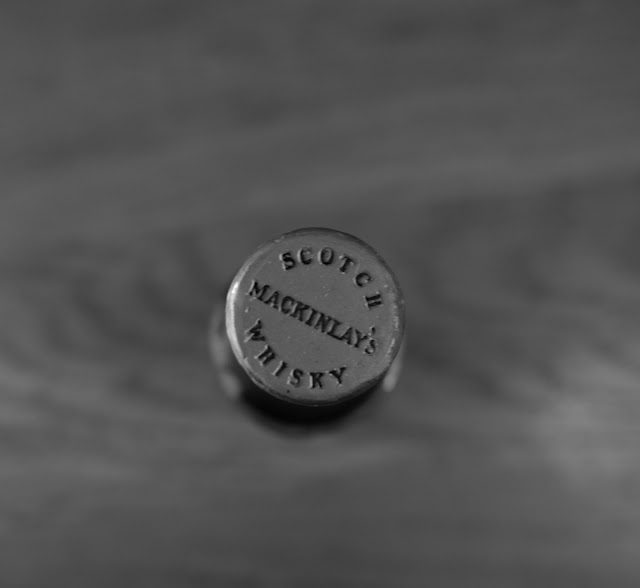 Personally, I don't like the branding of this release and it feels like a misstep compared to prior Mackinlay releases. There are also a few variations on this release with some coming with a 'guaranteed 5 years' statement, showcasing this is more a bulk blend with its focus at the cheaper end of the market.

Also, the 'Distillers' comment is prominent under the signature, highlighting the legacy of owning the Glen Mhor and Glen Albyn distilleries. Both of which would have supported blends at the time, so there is a chance this continued at the time of the bottling if there was an agreement. It is worth highlighting that when both distilleries were acquired by D.C.L. in 1972, the primary focus was purchasing sources of Highland malt for its own blends. So, I feel it is more likely that excluding a gentleman's agreement, the Mackinlay's Old Scotch may have had to look elsewhere for content.

Let's see what this edition offers us... 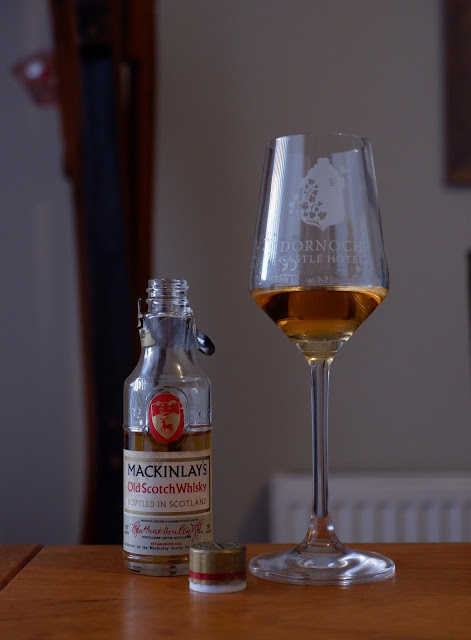 Colour: honeycomb
On the nose: sour plums initially and not much else, so I put it aside for a couple of days to settle down. Returning, old lemonade, green jelly sweeties, lime peel and a glass-like tint that I find is suggestive of an old bottle effect. Shortbread, used tea leaves, metallic, dried moss and an old oily rag.
In the mouth: caramel and a surprising level of sootiness in places. Chalk dust, toast, olives and a noticeable body underlines the density of the nose. Liquorice, chocolate, cloves and figs.
My thoughts
Fairly average stuff without that x-factor that you really hope to experience with a blend. There's a lack of fruitiness, instead giving rise to a density and machinery-like dynamic. Less commercial is another passing thought; not an immediate crowd pleaser or something for the masses. If you enjoyed a Mackinlay's in this era, then you were a character as well.
You'll pour this today and most will be turned off by it, as it isn't a lively or bubbly blend that captures your attention. There's something more dark and foreboding here, a bygone experience that (in most cases) won't be to your liking, but you'll be better for having taken a dip.
Always vary of miniatures, I'll pick up a full-sized bottle as over time, it may show new qualities. There's a high malt content present and I've certainly had worse blends form the 1970s but also much better, so this is an oddity that sits firmly in the middle of the pack.
Score: 5/10