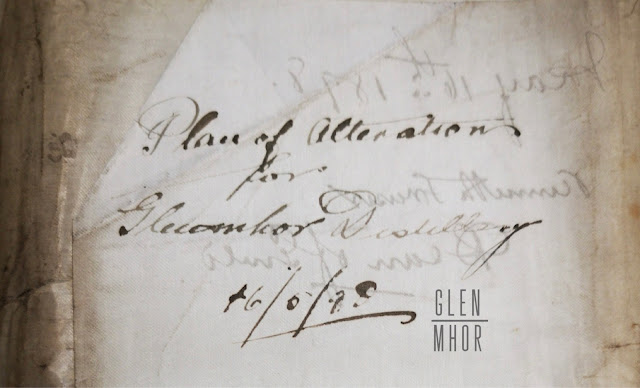 Barely four years old, and Glen Mhor is already expanding and changing beyond its original vision. Why the sudden uplift when there was always a demand for Highland stock according to the Mackinlays?

A good question, the whisky industry was on the crest of a boom (which would come crashing down), so things do change. There may have been a cautious approach from the Mackinlays when commissioning the project with John Birnie. I expect this will be answered once I move into the Glasgow archives which are home to the Mackinlay records. But these records that we've moving through in our distillery plan section, showcase the continuing effort and progress.

These plans were drawn up by Ross & MacBeth, based in the Queen's Gate Chambers in Inverness. They were a forerunner to Alexander & Ross, who would go onto work on several plans at Glen Mhor in the 1900s. Ross & MacBeth were also working with Glen Albyn in the 1890s.

All of which brings us nicely to this set of plans from 1898 that were submitted on the 16th May of the same year and immediately approved from the comments on the designs. The Tel S on the outer fold, refers to Telford Street which was a hub of whisky activity for the city.

Submitted on 16th May 1898 to the Dean Guild, these plans were granted by Kenneth Fraser, a representative of the Guild later that day. A very quick turnaround, possibly the result of preliminary enquiries before submission and that the modifications were to existing structures rather than completely new works. There are no comments or conditions noted on the plans, unlike the 1893 submission, which highlighted the chimney height.

The most exciting aspect of these records is that they visualise and confirm the changes that John Birnie discussed with the writer for Distillers & Brewers Magazine, also in 1898. History shows us that these changes never actually took place, or were delayed until 1925, when they were partially introduced with the 3rd still and washbacks being delivered. In-between, you had the First World War, the small matter of Glen Mhor being used as a US Naval base and the more pertinent matter of the Pattison Crash which landed in December 1898. This would have torpedoed any plans for growth as the whisky market contracted, rapidly.

Also, it is worth highlighting the acquisition of the Glen Albyn distillery (just over the road) in 1920, may have been a more practical, cheaper and immediate solution to increasing production of Highland malt.

I suspect, once again, that the delay in delivering the suggested alternations in these 1898 plans, may be entombed in the Mackinlay archives. Some may have been implemented before things grinded to a halt and if that's the case, I'll find out. However, for now, we'll just look at these remarkable plans and ponder their impact. 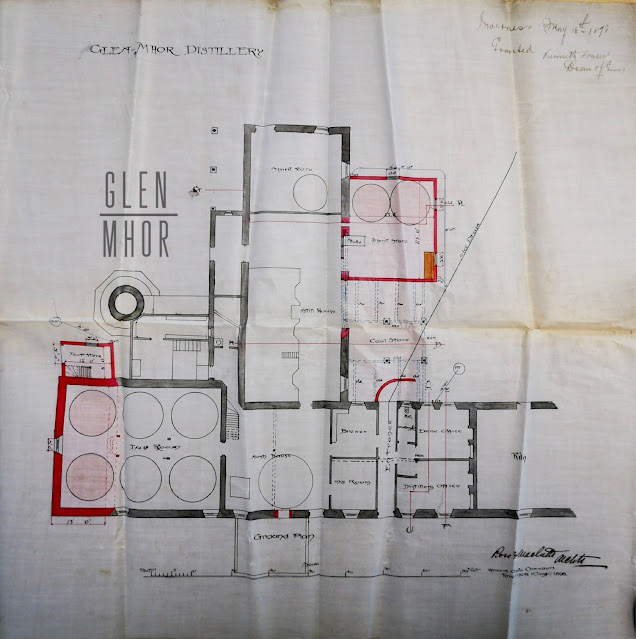 Expansion of the washback room

Increasing capacity from 4 washbacks to 6 in total, by adding another 13 feet to the room dimensions. We know from the magazine article this was described as:

'Mr. Birnie now conducted us to a lower storey, where we reached the tun-room, over 40 feet in length with a concreted floor, and contained four large fermenting vessels, each with a capacity of 6500 gallons. Space has here been reserved, for an extension to hold other four tuns.'

As mentioned, these 2 washbacks would only arrive in 1925 and in total, Glen Mhor would only ever have 7 according to information so far. Where that seventh washback comes from remains a source of interest, possibly during the 1940s upgrades is my guess currently.

Regulars may recall that the original plans had the yeast house in the same exact spot as these 1898 plans. It seems a logical place right beside the washback room. However, the 1894 sketch was in pencil and seemed to be unconfirmed, with the turbine room favoured instead.

This alteration, around 10 feet by 5 feet (smaller than the original version), reverses that decision and seems entirely logical given our research on Glen Mhor and how it preferred to import yeast from several brewers in Scotland and England. The need for storage would have been great and vital.

This is greatly extended and on paper at least, creates a new building in a clutter of the addons that you would come to see from the Caledonian Canal. Two new vessels capable of storing spirit would be created. In addition, the Spirit Safe would be relocated to this new room, presumably from the original room, or far end of the still house. In this image from what I presume is the 1960s, shows us the Spirit Safe and hopefully through further research we can pinpoint where it was located, or it indeed, it was moved.

This is effectively doubled in size, closing the gap between the above Spirit Store extension and distillery offices from the original building. New space would have been needed with the intended doubling of the stills. 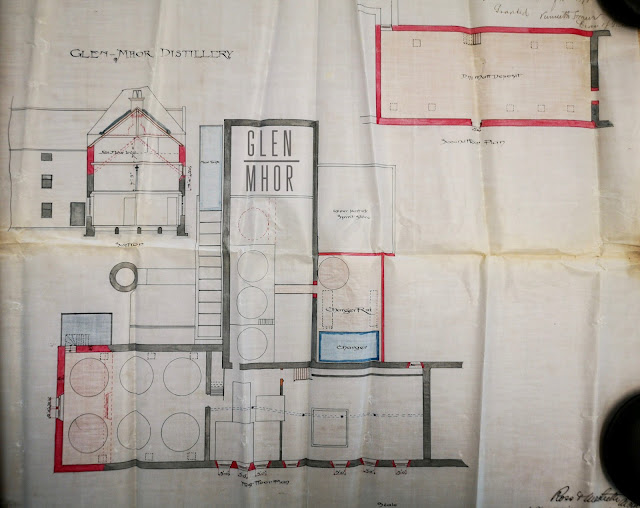 Upstairs above the Coal Store, on the first floor, this would play host to the charger room.

What's also of interest on the first floor plans is that these show us the positioning of the three stills that would become a reality in good time. It also throws into question another nugget from the aforementioned magazine article:

'The still-house, which we next visited, is an excellent structure, 50 feet in length, and with perfect ventilation. It contains two pot stills, and two more are soon to be added.'

The drawing gives us the intended positioning of all four stills. With one interestingly being more lightly sketched, suggesting that the idea of a fourth still was not quite set in stone. This would turn out to be correct; as the fourth still never arrived. And I would take from this drawing that the new third still would be at the bottom of the room, adjoining the existing platform and stairs.

What's also notable on this section is the gantry that leads across to the stills, highlighting how they are perched up over those direct flame pits beneath - best seen in this image.

Easily missed, this new tank would sit beside the outer wall of the Still House.

A new 2nd floor was being built to cope with the additional malting demands from effectively doubling of production. While this would help increase production, from this plan it seems the 1st floor ceiling would be just 7.5 feet

These proposed changes are also displayed in a series of external drawings, showcasing their impact on the existing Glen Mhor structures. The front elevation (facing the football ground) would remain fairly intact, with just the extension of the washback room on the left, representing a modest change.

The west end elevation of the tun room, gives us a side of the distillery rarely seen

Whereas Section G.H. shows us the Still House, looking towards the canal, with the new tank perched up high and the extended Spirit Store extension sitting on the opposite side. 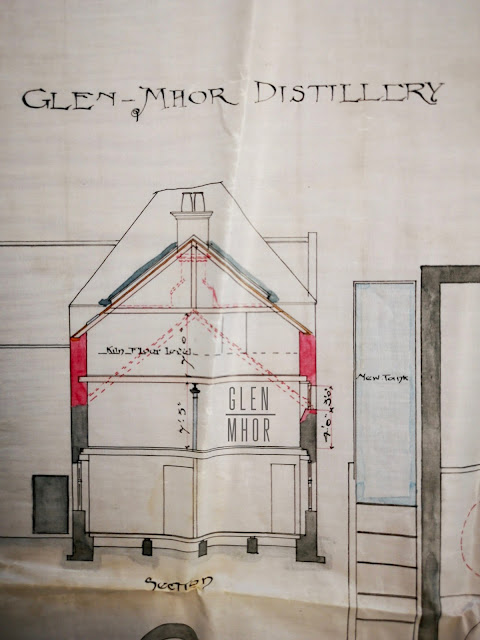 Alan Winchester kindly offered his thoughts on these alterations...

'The arrangements for the sunroom, make sense, as you say it would be interesting where the 7th Washback was located, the thing about the extra washback, after world war two, the Customs and Excise allowed concurrent distilling and brewing this generally allowed the distilleries to double their distillation capacity, hence the need for more malting capacity, this was because of shortage of materials, they would not allow a lot of new building. The separate mashing and distillation was a requirement of the 1823 Distilling Act.
I am seeing that the chargers are at a first floor level, the replacement for what I suspect was the Wooden charger, in a cast iron charger, unsure from the details if it is a wash charger or Low wines and feints charger, also there was a foundry in Inverness, I would expect it was a wooden wash charger.
It's a pity it does not show the actual location of the Stillhouse receivers and spirit safe, which I would suspect would be on the ground floor, the proposed drawing shows 2 receivers round, probably wooden, with spirit safe in this building, seems strange, it does say spirit store but I would expect this to be called a Receiver room? So unsure if this is correctly labelled. I wonder if they had a separate safe for the 3rd Low wines and feints still, as the photograph of the safe appears to show a two still spirit safe set up.' 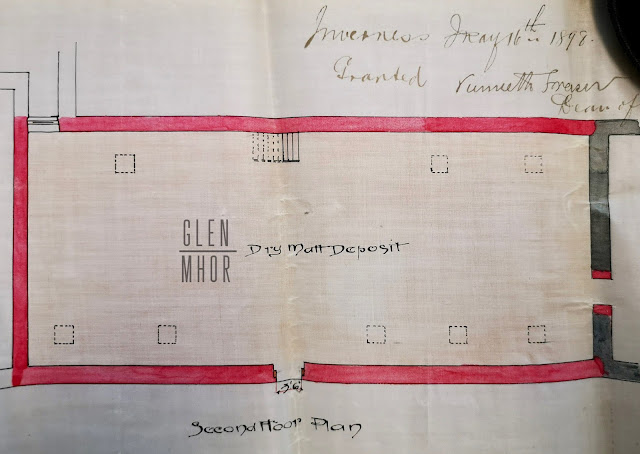 Overall, these are ambitious plans to increase the capacity of Glen Mhor distillery. The doubling of stills, coal storage, spirit storage and boost washback capacity by a third, would have a sizeable impact on what the distillery could produce. A new warehouse was also approved in November 1898 and this was built, unlike the majority (if not all) of these additions to the distillery above.

What I can promise are more answers, as we still have several plans of the distillery changes to publish. These will confirm future plans but also what was delivered previously. At this point and time in the Glen Mhor research, these 1898 Alterations were never delivered.

My thanks to Rose for working her magic on these photographs. We've watermarked the images from the Highland Archive Centre in Inverness to protect the originals which are referenced as R65 Telford Street - Dean of Guild Plans. As with any images on this website, please ask first before using and always give credit. My thanks to the Centre for their continued assistance.